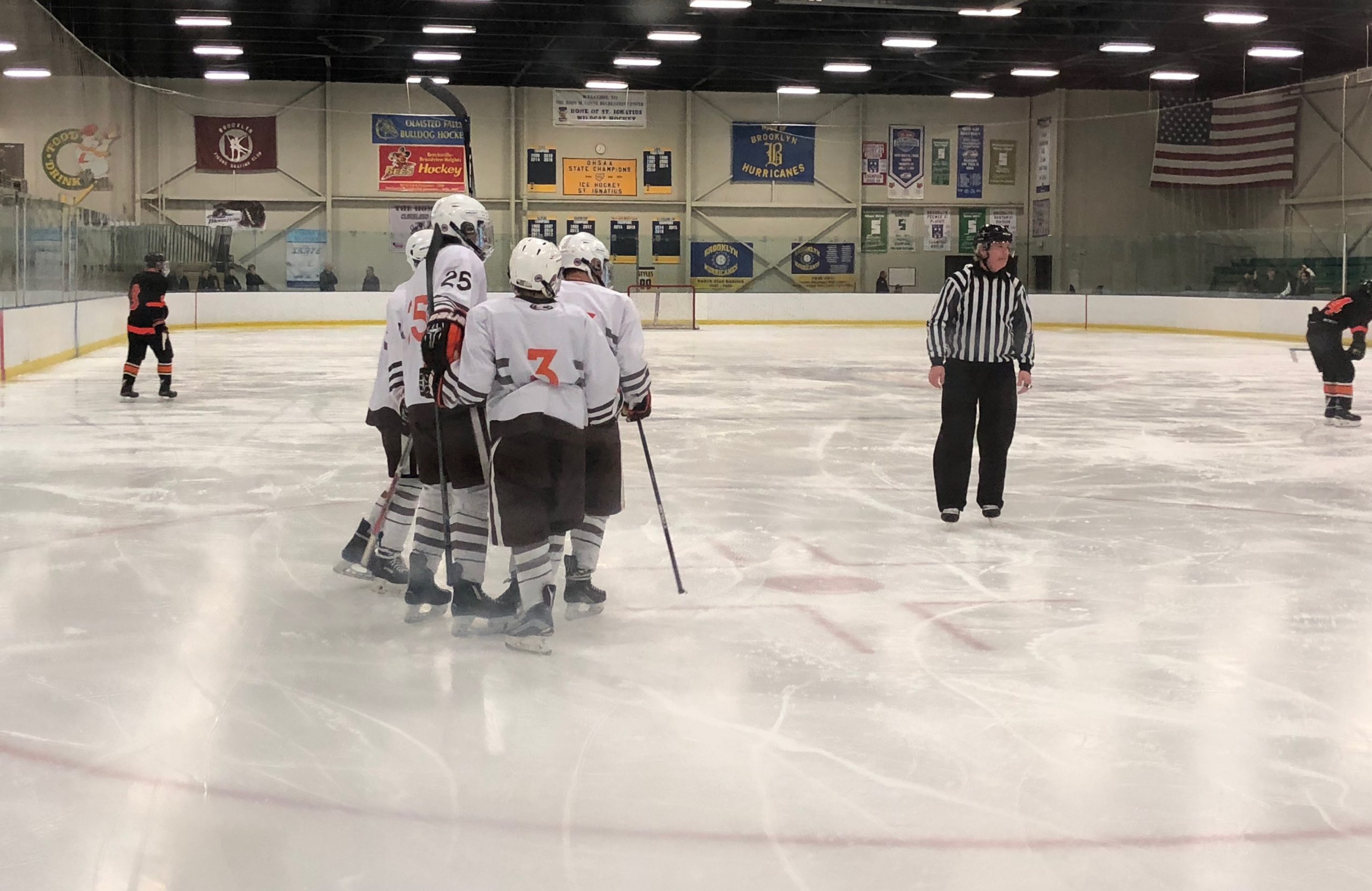 BROOKLYN, Ohio- It was a hard-fought victory on Tuesday for the Padua Bruins, who edged out the North Olmsted Eagles in an overtime affair by a final score of 4-3. The Bruins had to really work hard late in the game to avoid a complete collapse that had seen them let North Olmsted even the score at three late.

The game started off with a scoreless frame played by both teams, as both back lines stood tall as the opposition worked inside the defensive zones. Goaltenders RJ Shuette and Ryan Godin shut down every shot sent their way and saved a combined 19 shots in the opening period. The teams would head into the break looking for ways to score.

A goal by Ryan Kisel at the 7:19 mark of the middle stanza would get Padua on the board first, as Kisel found his way to the front of Godin’s cage and fired to score. Kisel’s goal was set up by the aggressive nature of the Bruins that really intensified in the second period. Padua would play lockdown defense and head into the intermission holding a 1-0 lead over the Eagles.

The third period is where things got extremely interesting. CJ Talion stretched the lead to 2-0 when he struck for a marker at the 4:26 mark. Talion kept finding teammates to set up passing lanes and as a result, it winded up setting him up for a goal not too long after that. It appeared that Padua was starting to run away with the game. That’s when North Olmsted found their flow.

A marker by Riley Vertosnik at the 5:35 mark made it a one-goal deficit in the third period. It was another goal for Vertosnik, who continued to impress the masses with another strong season for North Olmsted. Jake Mlady took a break from laying hard checks in the defensive zone to even the score at two at the 10:48 mark. But just when it seemed like the momentum was with North Olmsted, Liam Bandura scored through Godin’s five-hole to regain the lead for the Bruins just eighteen seconds later.

Vertosnik put another puck home just ten seconds after that to make it a tie once again, this time at three.

A scramble in the offensive zone of the Eagles almost ended the game for North Olmsted, as Vertosnik scored from the right side of the crease as time was ticking down. Unfortunately for Vertosnik and the Eagles, time had expired before the puck crossed the goal line. Overtime would take place as a result of the deadlocked score.

After multiple trips up and down the ice for the two squads, Padua was able to pot the game-winner and advance to the second round. Talion followed home a puck and batted it in to lift his Bruins team to a 4-3 victory and a date with the Rocky River Pirates.

“I saw Justin Ellis, he came flying down the side. I knew (to) just crash the net,” said Talion on what he saw during his game-winning goal. “We needed something, (a) garbage goal, anything. We were in overtime, had to get it done. So crash the net, rebound came straight to me, I had the open net.”

Padua meets Rocky River on Saturday for a second-round matchup in the Brooklyn District Tournament.

Avon Lake Rallies From Behind To Stun Amherst Steele, 4-3; Shoremen To Take On Olmsted Falls In Second Round
Avon Overtakes Chagrin Falls 1-0 In Overtime