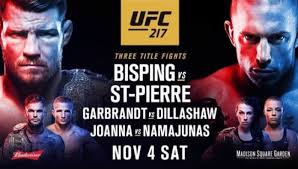 Let’s look at the fight card and my predictions for each fight, including three fights on the undercard that catch our eye.