In light of Green’s Supension, Cavs Have New Life; The Domino Effect of Missing Draymond 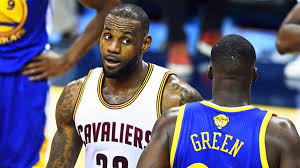 The Warriors were viewed as a heavy favorite to win Game 5 and end the series 4 games to 1 before the suspension.

Las Vegas still seems to think the Warriors will do that, as the odds went from Golden State being a 6.5 point favorite to a 6 point favorite at the Westgate Las Vegas SuperBook.

However, Green is a valuable player. He’s not only valuable for his attitude, energy, and what would some would say “dirty” playing style, but he’s also a great rebounder and skilled passer, with a complete two-way game.

His absence will surely be felt on the court, both with his energy and the tangible plays he makes on the floor.

The Cavs have to be feeling a boost from this news. After Game 4, LeBron James told reporters his mindset was “to win one game.”

If Cleveland can pull that off, it’s a 3-2 series and the Cavs are back home for Game 6 with a chance to tie the series.

The Cavs play much better at home and it would not be out of the ordinary for them to force a Game 7, but of course everything right now is centered around Game 5.

The domino effect of Green not being on the floor influences what both teams will do.

For the Cavs, LeBron will most likely go back to the small forward position and Kevin Love will be comfortable in the starting lineup at the four, not having to be matched up with Green.

The Warriors could start Harrison Barnes and Andre Iguodala at the same time, which would leave their bench somewhat thin.

Green is averaging 15 points, 10 rebounds, and six assists per game in the playoffs. He was making a case for Finals MVP with his all-around efficient play on both ends of the court before the suspension.

Iguodala and Barnes are good players who fit in the system perfectly, but the flow of the Warriors is not the same without Green on the court.

Often times, he initiates the offense and it runs through him, to set up Steph Curry and Klay Thompson to get good looks from three-point range.

It will be interesting to see how the Warriors play, what type of energy and emotion they come out with, and how fired up the Cavs are now with just one more edge on their side to give them a better chance than they would have otherwise.

Will the Warriors come out with even more energy, like the Cavs did in Game 3 when they learned Love would not play? LeBron and Kyrie Irving told Love before the game “We got you,” and went out and won it for him.

Maybe the Warriors will do something similar.

Warriors head coach Steve Kerr told his team after Game 4 that “Game 5 will be the hardest game of the series.” Little did he know it will be even more difficult than he previously imagined.

Can the Cavs stave off elimination, live to fight another day at home, and then force a Game 7 to try and do what no team has ever done in the history of the NBA Finals; come back down 3-1?

Only time will tell, but it all starts with Game 5 on Monday night.