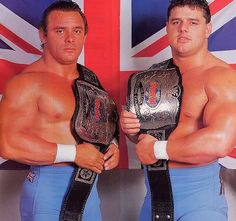 It has now been confirmed that legendary tag team wrestler Tom Billington, better known as “The Dynamite Kid” has passed away.

He is best known for his time with the WWF as one of half of the British Bulldogs. He would team with his cousin The British Bulldog Davey Boy Smith in the early and mid 80’s as one of the most beloved tag teams in WWF history. Their greatest moment coming in a classic match at WrestleMania 2 when they won the WWF Tag Team Championships against The Dream Team in the best match of 1986.

Billington left the WWF in late 1988 and never returned. His brother in law Bret Hart went on to great success in the industry and company. Billington was married to Bret Harts wife Julie’s sister.

Billington was reveled for his style, and was seen as one of the first “smaller guys” to be a headliner in the company while tagging with Smith.

He was 60 at the time of his passing.