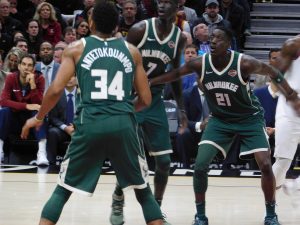 3. The battle of the boards

Considering the fact that the Cavs are still undersized even with Kevin Love’s return as Tristan Thompson and Larry Nance Jr. both remain out with injuries, it’s impressive that they were able to hang with Milwaukee inside on Monday night, outrebounding them 42-32, and just barely getting outscored in the paint, 50-46.

Afterwards, Kevin Love said he thought the Cavs did a good job of attacking the Bucks first to make the difference on the glass.

“I think just hitting them first, having that mentality,” Love said. “LeBron did a great job of that and we have a number of guys that had several rebounds tonight. They’re a long, athletic team. They get out in transition, they keep balls alive and they actually shot quite a bit of 3s tonight and those balls were flying all over the place, so I felt like we did a good job.”

Love on what the difference was for the Cavs on the glass tonight. pic.twitter.com/2jhYzPDblX