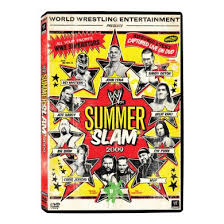 The 2009 edition of Summerslam was the first in a run of six straight from the LA Staples Center.

It was another great card, building of the success of an excellent WrestleMania 25.

Top billing went to the TLC Match between WWE Champion Jeff Hardy and CM Punk. It was Punk stealing the show with a classic battle, outdueling the highflying Hardy to take his title as Hardy left WWE shortly there after. It was a great match for the ages. It did end in a mild shock as The Undertaker showed up to attack Punk as the show ended. Great ending to a great card!

The undercard was loaded as well as Rey Mysterio successfully defended his IC title against Dolph Ziggler in a fast paced opening match that got the crowd going early.

Randy Orton managed to hold on to his World Title in a wild affair with top contender John Cena. Orton used several bouts of interference run ins to grab the duke over Cena.

DX made a triumphant return (again) with a dominant win over the up and coming Legacy group.

It was a great card that gave LA LA land fans a good preview of what the next five years of Summerslam would have in store for them.