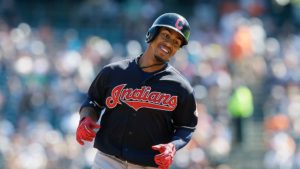 In the 4th inning of the game on Wednesday Indians shortstop Francisco Lindor, homered to left field. At the time the Athletics were leading 1-0 until Lindor tied things up with that home run.

With Lindor’s homer in the 4th inning that marked 16 consecutive games that the Indians had hit a home run in.

The Indians will be looking to tie their longest home run streak tomorrow afternoon.

With Lindor’s homer in the 4th inning, that was his 12th of the season which ties his total from 2015 (the year he debuted) and is only three homers shy of his career high of 15 that he set last season.