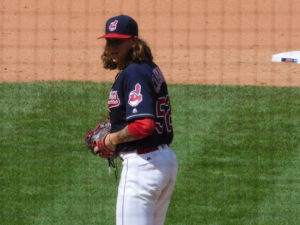 Clevinger had 7 strikeouts in the first 4 innings in his start this evening but did not add anymore following the 4th. Clevinger was one strikeout shy of tying his career-high in strikeouts (8).

The #Indians have 26 strikeouts in the last 13 innings of play against the #Athletics . 19 last night, and Clevinger with 7 through 4 today

Clevinger just had trouble with one batter in the Athletics lineup Chad Pinder, Pinder was 2-2 against Clevinger and hit two homers off of him, he also drove in 3 RBIs.

Indians pitching in the first three games of the series have struck out 42 Athletics batters.