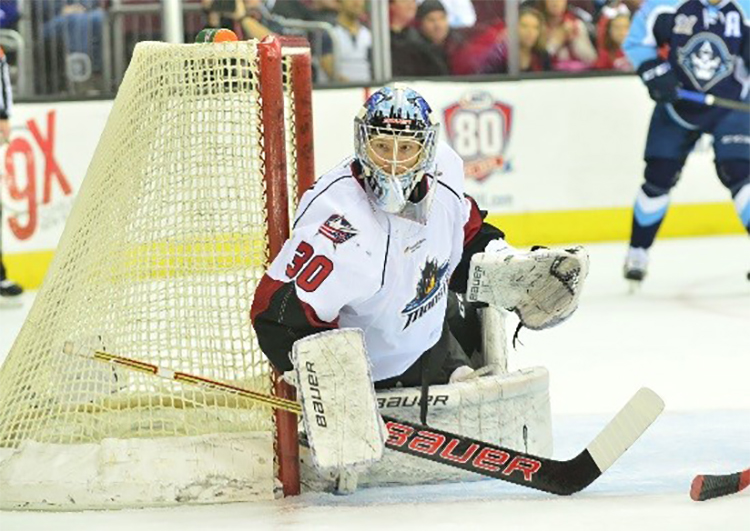 With the win, the Monsters improved to 37-28-4-4 overall this season and with a .562 points percentage, currently sit in a dead heat with the Charlotte Checkers for the Central Division’s final playoff spot with three games remaining in the regular season.

The Monsters struck first on Saturday, as Joe Pendenza rifled a transition wrist shot past Griffins net-minder Jared Coreau to make it 1-0 Cleveland at 15:11 of the opening period thanks to a nifty four-on-four setup from Markus Hannikainen and Dean Kukan.

In the middle frame, the Monsters posted three more unanswered scores, from Sonny Milano at2:40 with Sam Vigneault and Hannikainen collecting even-strength assists on the play, from Hannikainen at 10:20 thanks to Milano’s lone five-on-five feed, and a power-play strike from Milano at 15:55 with John Ramage and T.J. Tynansupplying the opportunity.

With Cleveland leading 4-0 entering the third, Monsters goaltender Brad Thiessen stood tall the rest of the way, providing a grand total of 31 saves in victory to improve to 5-6-1 between the pipes this season and notch his third shutout of the campaign. On the other side, Coreau fell to 17-11-2 by allowing four goals on 13 shots faced through two periods before Eddie Pasquale stopped eight shots in relief for the Griffins in the final period. With Saturday’s win, the Monsters have claimed victory in ten of their past 12 games and have earned a point in 11 of their past 12 outings while also extending their latest point streak to five games.

Next up for the Monsters, it’s a Sunday rematch vs. the Griffins with full coverage, live from The Q, underway at 5:00 pm on CLE 43 WUAB, 99X and the Monsters Hockey Network.