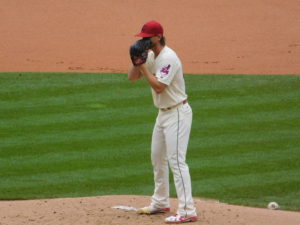 Josh Tomlin made his final regular-season start on Sunday afternoon, and in the process earned his 10th win of the year.

He ended the game after five and one-third innings pitched, giving up four hits and one earned run off of a homer en route to striking out six. Tomlin threw 73 pitches, 52 for strikes. 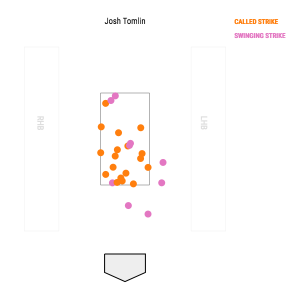 Tomlin really hit his stride in July, and went 6-0 over his final 10 starts of the season, posting a 3.11 ERA with 45 strikeouts and just three walks. After his start against Detroit on July 1, Tomlin was 4-9 with a 6.17 ERA.

With Tomlin’s win, the Tribe had five pitchers with at least 10 wins during the regular season (Kluber, Carrasco, Bauer, Clevinger, Tomlin), making them the first team to have two straight seasons with five 10-win pitchers since the Tampa Bay Rays did it in 2011 and 2012.

The Indians also wanted to work as many of the bullpen guys into the rotation as possible on Sunday, and Joe Smith, Tyler Olson, Zach McAllister, Andrew Miller, Bryan Shaw and Cody Allen all got time on the mound.

Combined, the bullpen went three and two-thirds innings, gave up no hits, had eight strikeouts, and walked just one batter.

For the entire year, the Tribe pitching staff has notched 1,614 strikeouts, setting a new all-time MLB record. They also end the year as American League and MLB leaders in team ERA with 3.30.

Cast Your Vote For The Week 6 NEOSI Player Of The Week
Takeaways from BGSU’s loss to Akron, the season so far