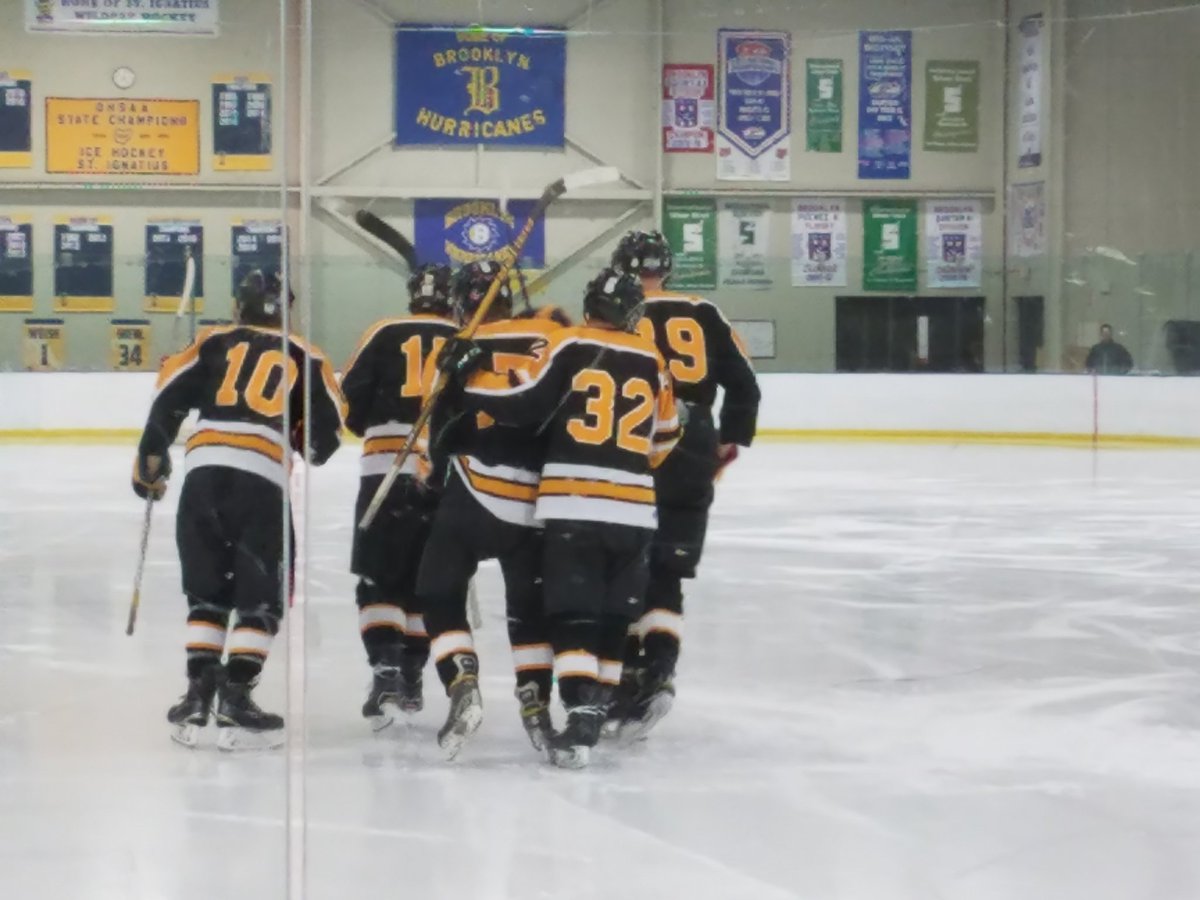 BROOKLYN, OHIO – The Cleveland Heights Tigers fought back from an early 2-0 deficit to defeat the Rocky River Pirates 3-2 in OT, as Owen Lang scored the game-winner to finish off the comeback.

It was all Pirates early on, as Austin Weaver put the Pirates on the board 54 seconds into play, stunning the Tigers.

Noah Hess added another goal to give Rocky River a 2-0 lead with 5:35 left in the first period, and the Pirates held Cleveland Heights scoreless the rest of the frame.

Down by two, Cleveland Heights head coach Eddie Babcox gave his team a message during the first intermission.

“I told our guys, ‘all you need is one early and then you’ve got the momentum.'”

22 seconds into the frame, Stephen Lang answered the call, scoring his team-leading 29th goal of the season.

Rocky River didn’t let that goal spiral in the second period and had plenty of chances to get the lead back up to two, but senior goaltender Trent Swain made 18 saves in the period, keeping it a one-score game heading into the third.

“I was just trying to stay focused, keep my eye on the puck at all times, and stay in the zone,” said Swain.

Neither side gave any ground in the first nine minutes of the third, but Lang delivered once again for the Tigers, tying the game with 5:17 to play.

Four minutes later, Cleveland Heights went on the power play after an interference penalty, but the Pirates held the Tigers off, and had a breakaway opportunity as time wound down, but Swain made the save to send the game to overtime.

Cleveland Heights the 2nd team to come back down 2 pic.twitter.com/aH9iv9ZrDO

Cleveland Heights still had 33 seconds left on the power play, but right after the Pirates returned to full strength, Rocky River was called for roughing, giving the Tigers the advantage once again.

Cleveland Heights jumped on the opportunity, winning the draw in their offensive zone, and Owen Lang scored off a pass from Noah Weisblat, flipping the shot home in the midst of chaos in front of the net.

Cleveland Heights comes back down 2-0, after 1st period

It was Weisblat’s team-high 29th assist of the season.

“I saw Noah get it behind the net and I wasn’t really expecting the pass that early, but it was a great pass from Noah and I kind of lost it by my feet” said Lang.

“So I just thought OK, I better shoot it, and I saw it go in and it was great.”

The Lang Brothers did all the scoring for Cleveland Heights, but the comeback would not have been possible without outstanding play from Swain, who was under barrage much of the night, but held Rocky River scoreless for the final 37 minutes of action.

Swain was in net for Cleveland Heights’ Baron Cup II Championship run in 2016 and knew that he’d have his hands full against Rocky River, moving up to the next level.

“Coach told us this was the biggest upset for Heights in ten years,” the senior goaltender said.

Coach Babcox knew his team had a tough challenge ahead of it coming in as the #7 seed against #2 Rocky River, but believed his team was ready to show it belonged at the next level.

“I knew we had the heart.” said Babcox.

“This team never quits in any situation. If we’re down one or up one, if we’re down ten or up ten, they never turn it off, so I wasn’t surprised we were able to hang with a team like Rocky River. I’m just proud of the kids and their effort.”

The 2016-17 Tigers are no strangers to the big stage in Brooklyn, as many of Cleveland Heights’ returning players were key contributors on the 2016 Baron Cup II Championship team, but expecting this group to replicate what happened last year was a tall task, considering all of the talent the team lost from its 2016 senior class.

However, when their backs were against the wall, the team played its best hockey, falling back on its experience and leadership.

“Moving into the Red Division has been a tough transition,” the coach stated. “Losing that squad was tough, but the main thing is our captains. Stephen Lang was a first liner last year. Coming into this year, he was able to have that leadership and all that positive energy and instill it into the players this year. We just kind of piggyback off that.”

“We only have three new players this on the team from last year, so we’re still pretty much the same team. We did lose a lot of seniors, but we didn’t have that many new guys coming in and we still have the same core so that’s helped.”

That core will look to pull off another upset in the next round, but after knocking off the second seed in Baron Cup I, it’s safe to say the Tigers won’t sneak up on anyone.

Cleveland Heights has a rich Baron Cup history, winning six titles between 1974 and 1991, the fourth-most of any school.

However, it’s been 26 years since the Tigers were crowned champs at the highest level of the tournament and this group hopes to etch its name in the books as the team that brought the cup back to Cleveland Heights.

They already ended a drought one year ago with the first Baron Cup II title in school history, and winning at the highest level of the GCSHL would be quite a way to follow it up.

Cleveland Heights moves on to the Baron Cup I semifinal to face #3 North Olmsted on Saturday, Feb. 11 at 7:30 pm.

The Eagles won’t be taking the Tigers lightly, and one of North Olmsted’s coaches joked after Cleveland Heights’ victory, “We can’t wait for (Swain) to graduate. We’re sick of playing that kid.”

We hope to see you at the Brooklyn Ice Arena at the John M. Coyne Recreation Center for what should be a thrilling contest.