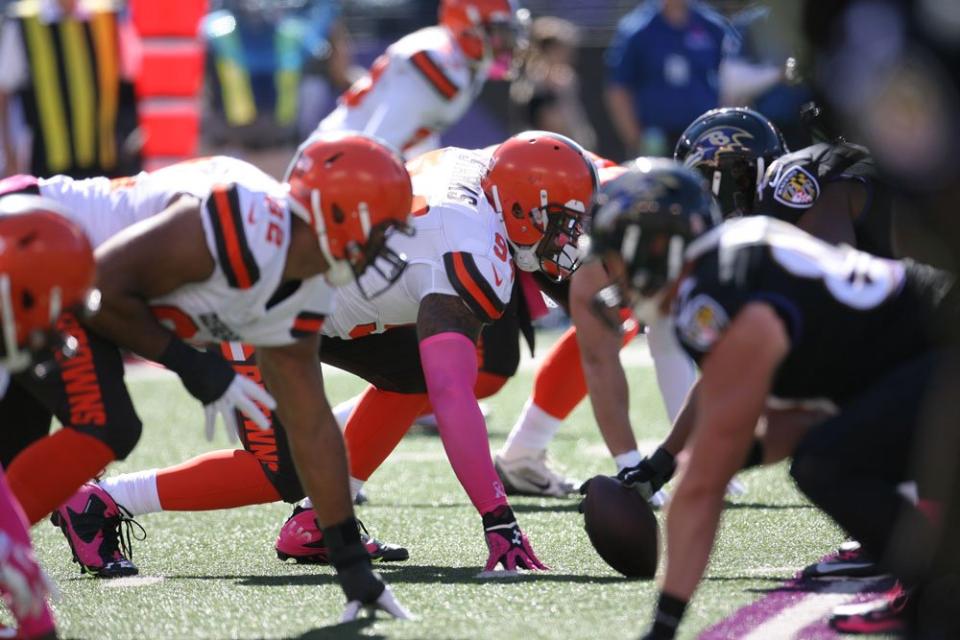 * The Browns are 1-0 in AFC North divisional play for the first time since 2004, when the team defeated Baltimore 20-3 in the season opener.

* Cleveland tied a franchise record with 12 third-down conversions. The only other time the team converted 12 third downs in a game was in 2008 against Seattle.

* QB Josh McCown completed 36 of 51 passes for a career-high and Browns single-game record 457 passing yards with two touchdowns, zero interceptions and a 111.3 rating. He added 12 rushing yards and his eighth career rushing touchdown. McCown is the first player in Browns history to throw for 300-yard in three consecutive games. His 1,154 passing yards over the past three games is a Browns record in a three-game span, surpassing the 1,038 totaled by Brian Sipe in 1980.

JOSH MCCOWN GAME-BY-GAME STATS THE PAST THREE WEEKS
Opponent Date Comp. Att. Yards TD INT
Oakland 9/27 28 49 341 2 1
at San Diego 10/4 32 41 356 2 0
at Baltimore 10/11 36 51 457 2 0
THREE GAME TOTALS 96 141 1,154 6 1
TE Gary Barnidge set career highs with eight receptions for 139 yards with a touchdown. Barnidge is the first Browns TE to record a touchdown catch in three consecutive games since Ozzie Newsome in Weeks 2-4 in 1983. Barnidge is also the first Browns TE to record six or more receptions in three consecutive games since Ozzie Newsome did it in four straight games in 1984. On the season, he is leading the team with 24 receptions and second with 374 receiving yards with three touchdowns. All of those figures represent career highs.

* K Travis Coons tied a career-high with four field goals, including a 32-yard game-winner in overtime. He has 8 field goals in the last two games and is 11 of 11 on field goal attempts this season and 9 of 9 on PATs.

* RB Isaiah Crowell rushed for 49 yards and added two receptions for 38 yards, including his first career touchdown grab on a 22-yard pass.

* WR Travis Benjamin tied a career-high with six receptions, while adding 83 yards. He is leading the team this season with 411 receiving yards.

* LB Armonty Bryant recorded a sack and leads the team with 3.5 this season.

* Rookie RB Duke Johnson Jr. recorded six receptions for 55 yards and added 22 yards rushing. He is the first Browns RB to record six or more receptions in three consecutive games since Peyton Hillis in Weeks 11-13 in 2010. Johnson, who is third on the team with 21 receptions this season, entered this week’s games tied for second among all NFL rookies in receptions.

* LT Joe Thomas extended his consecutive-snaps streak to 8,241, the longest active stretch in the league. Thomas has started all 133 games and hasn’t missed an offensive play since being selected by the Browns with the third overall pick in the 2007 draft.

* After missing the past three games with an ankle injury, LB Scott Solomon returned to action. He suffered an injury in the first quarter of the season opener at the New York Jets on Sept. 13.