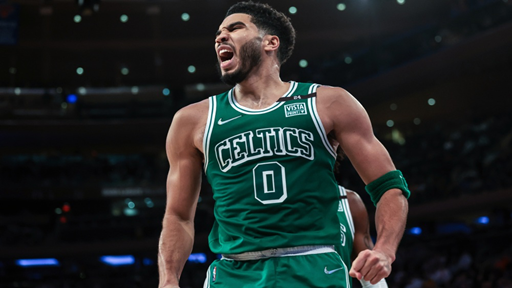 Game 7 of the Eastern Conference Finals headed back to South Beach on Sunday night. The home team in a Game 7 had won 77% of the time heading into the game. Miami was looking to capitalize on their momentum after winning Game 6 in Boston. Meanwhile, the young Celtics core were looking to reach their first NBA Finals. Game 7 was set to be one for the ages.

The Boston Celtics started the game with an offensive spark. The Celtics went on a 9-1 scoring run through the first few minutes. Everyone was getting involved early and often. Jayson Tatum started off on a good note with 8 points in the opening quarter. Grant Williams also dropped in 7 points of his own. The Heat on the other hand were struggling to find a flow on offense. They struggled to make baskets in the first quarter. They also committed 6 first quarter turnovers. The Celtics had the lead at the end of one 32-17.

Miami was looking to bounce back after a rough first quarter. They needed a good second quarter to stay in the game. Jimmy Butler began to take the game over. Butler was hitting shot after shot. He scored 17 points in the second quarter to lead Miami. The Heat had multiple small scoring runs throughout the quarter. This helped them cut down the Boston lead heading into the half. Boston meanwhile struggled to find a big offensive spark in the second quarter. After the first half the Celtics led 55-49.

With one half of play remaining, both teams would fight to keep the NBA Finals hopes alive. The third quarter saw a lot of back-and-forth baskets. Marcus Smart led the Celtics in scoring for the third quarter. He dropped 9 points in the quarter. Bam Adebayo was the leader for the Heat. He scored 10 points of his own in the third. After a hard fought and physical quarter, Boston held the lead with a score of 82-75.

Entering the final quarter, Boston needed to hone in to take Game 7 and seal a victory. Early in the quarter they did just that. The Celtics went on an 8-0 scoring run to extend their lead to 11. For a few minutes, both teams were trading baskets. Then the Miami Heat hit their stride. During the final minutes, Miami went on an 11-0 scoring run. This run cut Boston’s lead to just two points. Miami would fall just short, however. Miami missed on an opportunity to get their first lead of the game with 20 second left. This led to 2 clutch free throws from Marcus Smart to put the game away. Boston came out on top with a 100-96 victory.

Just like the Magic Johnson Award, this is the first season the NBA has given out an award for Eastern Conference Finals MVP. The inaugural winner of the award was Boston Celtic’s star Jayson Tatum. Tatum had an incredible series averaging 25.0 PPG, 8.3 RPG, and 5.6 APG. This year was Tatum’s third trip to the Eastern Conference Finals in his young career. He has now reached the NBA Finals for the first time.

The NBA Finals will begin on Thursday, June 2nd at 9PM EST. Golden State will host Boston for the first two games. Nobody on the Boston Celtics team has played in the NBA Finals. Meanwhile, the Warriors have a combined 123 games of NBA Finals experience. This is the largest margin of experience since the Chicago Bulls took on the Utah Jazz in the 1997-98 NBA Finals. You can tune-in to the game on ESPN.