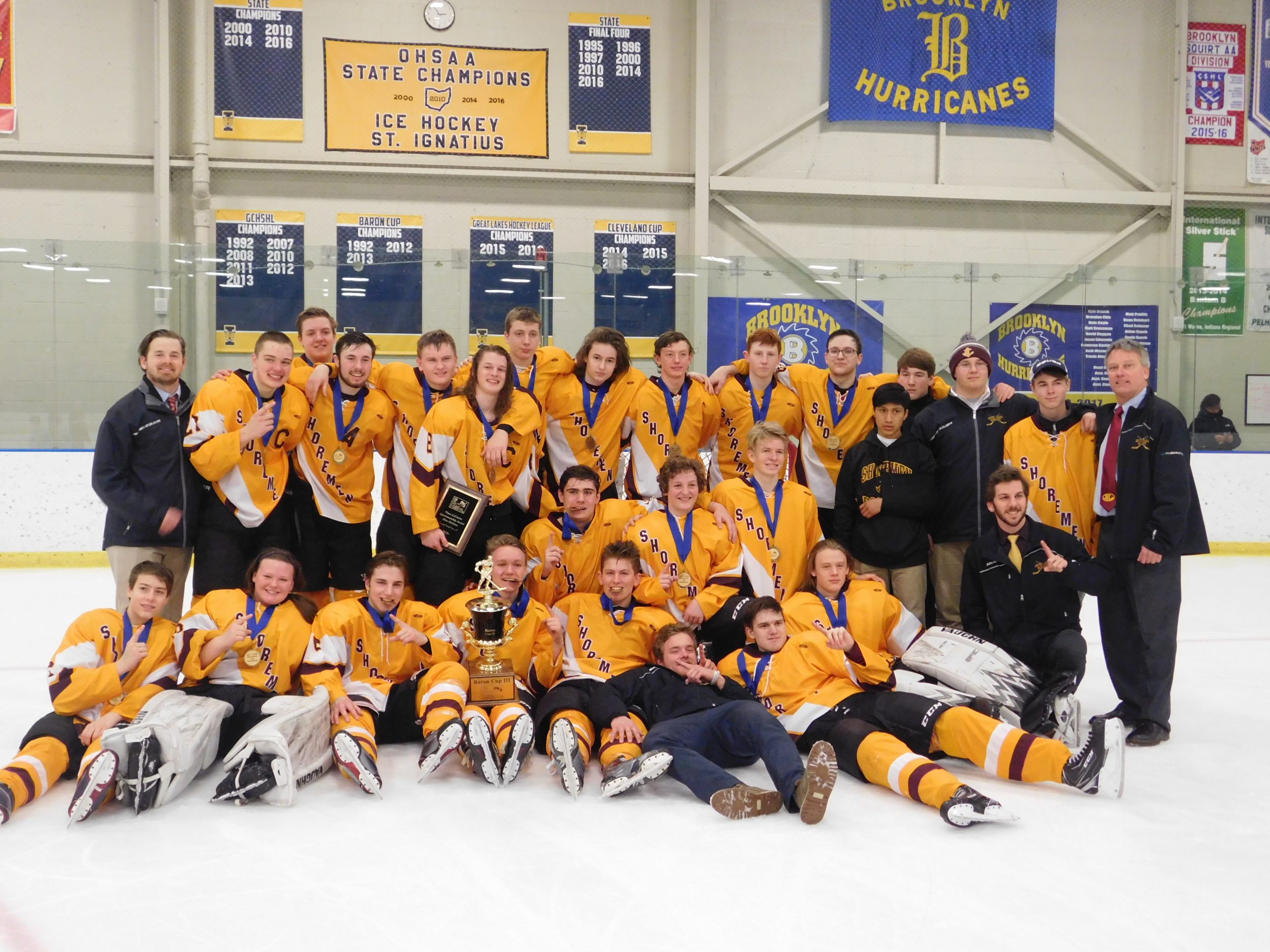 BROOKLYN, OHIO – The Avon Lake Shoremen left no doubt on Sunday who the best team in Baron Cup III was, as they dominated the Normandy Invaders with a convincing 8-1 win to raise the championship in Brooklyn.

It was the usual suspects leading the way in the win for the Shoremen, as playing in their last Baron Cup game, senior Connor Koncelik had a huge game with four goals and three assists, and fellow senior Jared Aslaksen scored twice including less than a minute in to get Avon Lake going.

The Invaders just couldn’t generate much in the way of offense against the Shoremen, and wound up the day scoring just once in the third on a power play goal, and were outshot by a heavy margin in each of the three periods.

The Shoremen didn’t take long to impose their will on the Invaders, as just 56 seconds into the game, it was Aslaksen taking a perfect pass and firing it past Ryan for a quick 1-0 Shoremen lead.

Normandy was unable to do much on offense in the first, and the Shoremen again struck with 9:56 to play in the first as freshman Murphy Mohar scored from Tommy Kacmarcik making it 2-0.

The Shoremen added a third goal as this time Koncelik found the back of the net from the right wing with less than two minutes left in the period to continue the onslaught.

Avon Lake had a huge shot advantage in the first, outshooting the Invaders 26-6 as they led it by three goals.

The Shoremen added another goal in the second as Koncelik put in his second of the day with 10:36 to play in the second period to make it a 4-0 affair.

The second period saw the Shoremen again lead in shots on goal, outshooting the Invaders 18-8.

Avon Lake cemented the Baron Cup III title scoring four goals in the first half of the third period, building an 8-1 lead with the clock running.

Koncelik scored first unassisted for his third goal of the day, and then after Normandy scored their only goal on the power play with Alex Frankie lighting the lamp 1:53 into the period, it was Koncelik again with 12:25 to play in the third with his fourth goal making it 6-1.

The Shoremen were not done, as Aslaksen got in on the action, scoring his second goal of the day with 11:16 to play in the third, with Koncelik getting his second assist to make it 7-1.

Koncelik got his third assist with a few minutes later with 8:58 to play, the goal for the Shoremen going to sophomore forward Nick Ospelt making it 8-1.

Avon Lake will play in Brooklyn on Tuesday evening as they will take on Amherst Steele at 8pm. The Invaders will take on Elyria Catholic Sunday the 18th at 2:30pm.

Click the Pages Below to See More Pictures From the Baron Cup III Title Game between Avon Lake and Normandy!