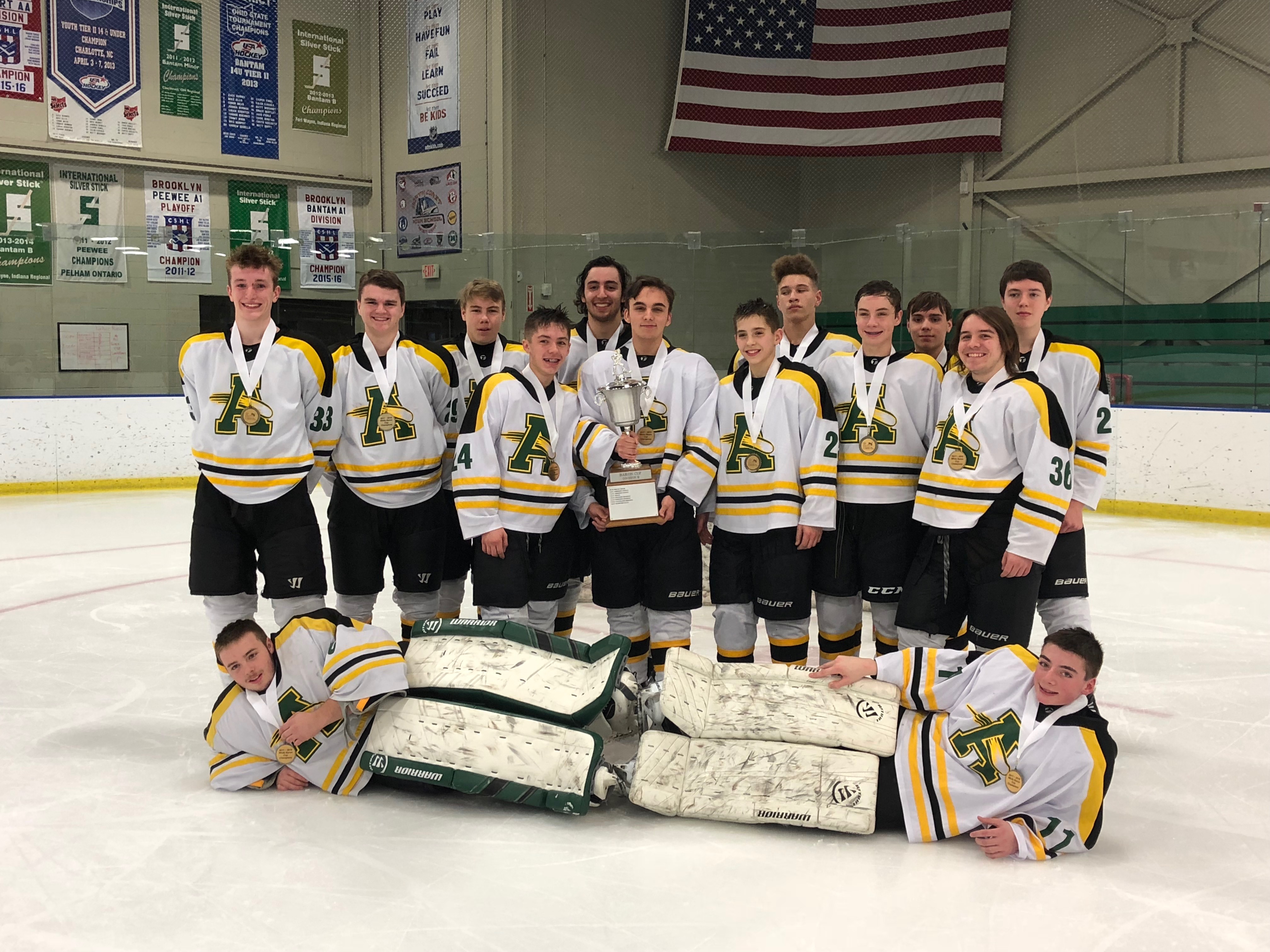 BROOKLYN, Ohio- The Olmsted Falls Bulldogs and the Amherst Steele Comets looked to claim the Baron Cup II Championship on Sunday, both teams coming into Championship Sunday playing the best hockey of the season. The Bulldogs were looking to repeat as champions of the White League while Amherst Steele was trying to go from 11-17 the year prior to being amongst the cream of the crop in the GCHSHL.

The game started off in Olmsted Falls’ favor, as Brady Fitz-Patrick scored just fifty-five seconds into the game to open the scoring for the Bulldogs. The Bulldogs continued to create havoc inside the defensive zone of Amherst Steele and created another opportunity to strike. Max Kirth-Gruszczynski found an open net all to himself and powered home the rebound attempt to make it a 2-0 lead for Olmsted Falls late into the opening frame of play. That 2-0 lead would stand heading into the first intermission of play.

Nathan Harmych started the revival of the Comets’ offense, as he struck for a power-play goal at the 9:09 mark of the middle stanza. Harmych worked free while a lot of attention was paid to Jacob Kramer, who would come into the fold later in the contest. Brady Fitz-Patrick gave the Bulldogs another two-goal advantage after pulling a rabbit out of his hat, so to speak. Fitz-Patrick was being mirrored by a defender when he tossed the puck around the left of the defender. The freshman was able to stretch his stick out far enough to pocket it past freshman goaltender Brady Grove’s left side. Nathan Harmych made his presence felt with another power-play goal at the 13:51 mark. A 3-2 edge was in favor of Olmsted Falls heading into the final fifteen minutes of play.

Dominic Conte appeared to put the game away and seal a back-to-back championship run for the Bulldogs with a poked-home puck thirty-two seconds into the third period. However, sophomore Jacob Kramer decided to take a stab at the right top-shelf for a marker at the 4:15 mark to slim the deficit to one again, 4-3. Kramer struck again at the 5:21 mark by beating Angelo Hanson on his glove side to tie the game at four apiece. The Comets were back in the game with a whole lot of offensive momentum when the game took a seismic turn.

The Bulldogs were called for putting a hand on the puck in the crease, which is not allowed due to it saving the puck from sliding past the goaltender. As a result, Jacob Kramer lined up for a penalty shot. Kramer did not disappoint, beating Hanson for the third time in the game to not only earn a hat trick but also give Amherst Steele their first lead of the contest.

Jacob Kramer gets the hat trick on a penalty shot after @OFHS_Hockey was called for a hand on the puck in the crease. Kramer’s goal makes it a 5-4 lead for @amherst_hockey at the 7:02 mark of the final frame of play. pic.twitter.com/ewwplLaPnz

That goal would stand as the game-winner and as a result, the Amherst Steele Comets earned their first Baron Cup II Championship since 2012.