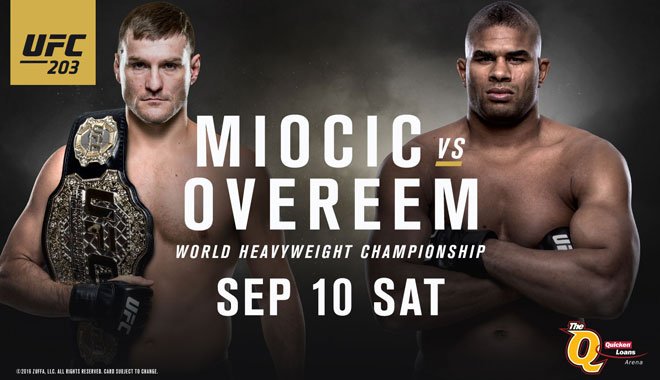 This, ladies and gentlemen, is your main event. For all the marbles, the richest prize in all of MMA.

Stipe Miocic looks to send Alistair Overeem back home empty-handed, as Overeem does battle with Stipe for the UFC Heavyweight Championship.

For Stipe, home-field advantage will be the complete opposite of his fight with Fabricio Werdum for the title, when he traveled to Curitiba, Brazil in a very hostile crowd. When Stipe connected with the punch that knocked out Werdum, all of Cleveland started rocking and the championships started to come in an abundance with the Cavs and Monsters winning their respective championships. It’s definitely the best time to be a Cleveland fan, as Stipe looks to continue the good times in Cleveland tonight.

Alistair Overeem is a very well-known fighter and has a lot of hardware. He looks to become the most decorated Heavyweight fighter by winning the UFC Heavyweight Championship tonight. Can he take Stipe and Cleveland and take the title home? Or will Stipe keep the title here?

At the end of the night, Stipe Miocic will defeat Alistair Overeem by second-round Knockout.