The Indians Are Still Facing a Dilemma with Trevor Bauer 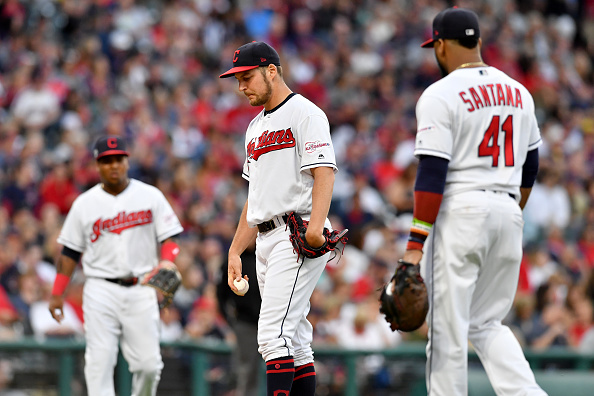 About a month ago, I claimed we’d know if the Cleveland Indians would be buyers or sellers based on what they did with starting pitcher Trevor Bauer. Playing on his second-to-last season of team control, he’s one of their most appealing trade chips if selling was the route they planned to take.

In the time since, Cleveland has gotten its season back on track. While still facing a sizable gap in the AL Central standings, the team is right in the thick of the wild card race. For the time being, there’s really no need for the Tribe to sell before the trade deadline.

However, this doesn’t mean the team’s conundrum with Bauer is a thing of the past. In fact, you could argue that the Indians, despite their recent resurgence, remain at the same fork in the road when it comes to whether or not they should move him.

The reasons not to trade Bauer are clear. Now that Cleveland has right-sized its season, one would think moving a star player from the roster would be foolish.

This is especially the case when you consider the Tribe’s most realistic playoff scenario is entering a one-game wild card play-in. You’d like to think Bauer’s name would be called if it meant pinning the team’s entire postseason hopes on one night.

On top of that, moving Bauer now while the Indians are playing inspired baseball would send an awful message to both the team and fans. It would be the front office’s way of saying it was still prioritizing next year over the current season, regardless of the turnaround we’re witnessing.

Despite all of this, you can still make a strong argument to trade Bauer.

The easiest way to do so is point out the fact he’s on borrowed time in Cleveland.

Bauer and the Indians will surely be heading to arbitration this winter if he’s still on the roster. Should this take place, the team will owe him yet another pay raise, something ownership likely wants to avoid. As a result, if he’s not traded this summer, there’s a very good chance Bauer ends up getting dealt in the offseason.

Another factor to consider is the fact his value decreases by the day. Sure, the Indians can likely still fetch a decent return for Bauer if they made a trade in the winter. However, a team is going to pay more for a year and a half of services than it would for just one season.

On paper, the idea of getting as much as you can for a star player you’ll likely be parting ways with in the long run keeps its appeal regardless of how the Indians look on the field.

Likewise, the idea of moving Bauer may be a little more palatable than it used to be for the front office considering what it’s seen from the farm system this season.

Zach Plesac has shined since being called up from Columbus in May, giving up no more than two earned runs in all but one of his six starts. Though his sample size is smaller, Aaron Civale was equally impressive in his big-league debut last Saturday, throwing for six strikeouts and zero earned runs against the Detroit Tigers.

To be fair, you could argue banking on Plesac and Civale despite their limited playing time this season is a risk, especially if Cleveland is still aiming for a playoff spot.

However, you could say the same about letting the value of a top-tier pitcher decrease despite the low odds of re-signing him.

Helping Cleveland with this issue is the fact the team’s recent hot streak has bought the front office some leeway.

There’s no longer pressure to move Bauer, as the Indians can instead let the market come to them. They can essentially tease his availability to see if another club is willing to overpay. If Bauer is still on the roster after the trade deadline, no worries, Cleveland can just revisit this in the winter.

At the same time, if the Indians are going to test the market for him in the offseason, it’d make sense to see if they could move him now when they can get more in return.

Vegas odds favor Bauer playing for a different team next season. The Indians just have to determine when that switch actually happens.

As it stands, it could still take place this summer, regardless of where they are in the standings.

Indians Clobbered in Camden Again by the Orioles; Shutout 13-0 for Second Straight Game
Indians Return the Favor, Bieber Dominant in 2-0 Shutout Over Orioles