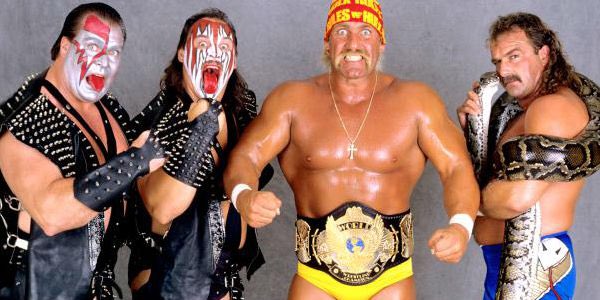 WWE Survivor Series is this Sunday Night and this seems like the perfect time to reflect back on the origins of what made it great.  From it’s inception in 1987 – 1991, It was strictly four on four or five on five elimination matches, and it was excellent!  Most times it would consist of two singles babyfaces teaming with a babyface tag team to face a quartet of bad guys.  Usually of the same sequence.

Then in 1992, they tried a year of almost all singles matches or tag team matches and it bombed badly.  From 1993 – 1997 it returned to tag matches with the usual World Title match mixed in and the fans went right back to loving it.

Through the years since then, it has flipped flopped many times but still has managed to churn out some epic teams.  Here now are the 10 greatest teams ever formed in Survivor Series history.  For the purpose to avoid argument, I listed them in chronological order by year.  These are the top 10 of all time no matter how someone would want to list them.  Enjoy!

Reason – Perhaps the greatest team ever assembled in Pay Per View history.  Four first balot Hall of Famers, and at the time, the four most popular men in the company.