The streak may be over, but the legend will live on 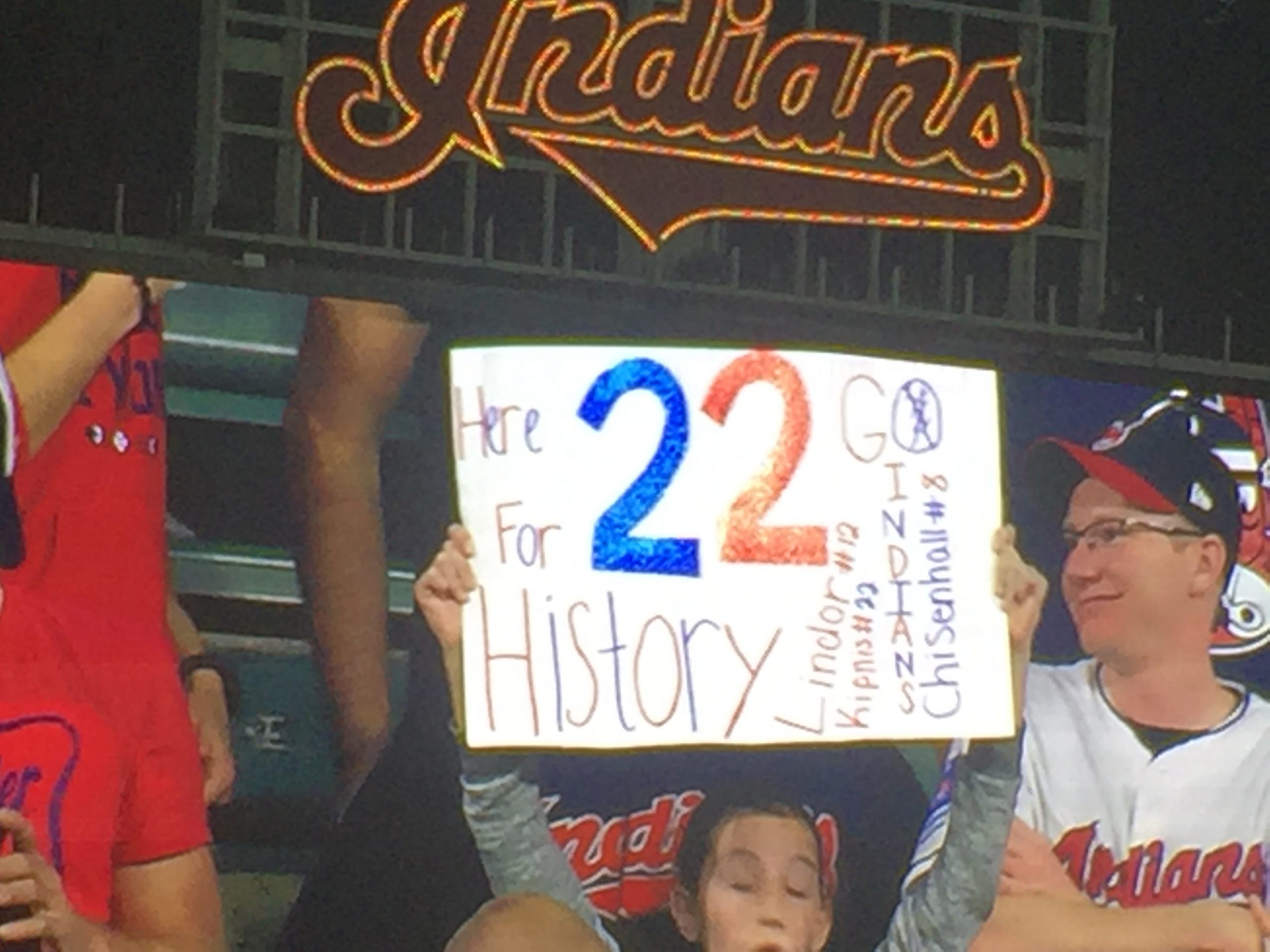 CLEVELAND– Following a 4-3 loss against the Kansas City Royals on Friday night, the Cleveland Indians stepped out of the dugout to give a literal and figurative tip of the cap to the sold out crowd giving them a standing ovation.

It was a sight of mutual recognition and appreciation after a record-setting 22-game win streak came to an end.

With the streak now over, the team can concentrate on clinching the AL Central, (their magic number is at two) and heading into October as they try to end a 69-year World Series drought.

But regardless of what happens in October, over the last three weeks the city of Cleveland has gotten to witness something truly magical.

Before Friday night’s loss, the last defeat came at the hands of the Boston Red Sox on Aug. 23. And while the sheer number of wins is truly a sight for everyone to marvel at, the more impressive aspect of this streak was how this Cleveland team won on a nightly basis.

The Tribe outscored opponents 142-37 during the stretch, for a +105 run differential. They scored first in 19 of the 22 wins, and trailed for just eight of 199 innings. There was only one walk-off win during the stretch, which did not come until the very last game (also the only game to go into extra innings) when Jay Bruce recorded an RBI single to keep the streak alive for 24 more hours.

Offensively, the team had a .306 batting average with 102 extra-base hits. Forty-one of those extra-base hits were home runs, so yeah, the Tribe offense recorded more homers than opposing teams scored runs during this 22-game stretch.

The pitching staff was just as dominant, recording a 1.54 ERA, while the starting rotation recorded 19 of the 22 wins with a 1.77 ERA.

That’s all to say nothing of the fact that the Indians accomplished most of this without any help from the injured Michael Brantley, Jason Kipnis and Andrew Miller (Miller did come off the DL and made a lone relief appearance during Thursday night’s game).

This streak was dominant in a way that baseball has never seen before. But perhaps the best part about it was the way in which success was shared– so much so that it’s nearly impossible to pick an MVP.

And there are countless defining moments from over the last three weeks. In fact, it will likely be difficult for fans to pick a favorite.

There was the three-game shut out sweep of the Royals for wins two, three and four that included Bradley Zimmer’s Superman catch.

Ramirez going 4-for-4 against the Yankees with two homers, or going 5-for-5 against the Tigers days later to become just the 13th player in MLB history to record five extra-base hits in a single game.

Carrasco’s complete-game against the White Sox.

Erik Gonzalez having his first two-homer game, and Greg Allen hitting his first major league homer on the same night.

Lindor breaking two bats against the Orioles, then borrowing Abraham Almonte’s to hit a home run.

Jay Bruce’s three-run homer that gave the Indians the lead for good in their 21st victory.

Francisco Lindor’s RBI double to send game 22 into extra innings, followed by Bruce’s walk-off RBI single in the bottom of the 10th inning to give Cleveland their final victory of an unforgettable streak.

Then there’s the fact that half of these wins came on the road, in an unprecedented 11-0 road trip.

By the time the team came back to Cleveland, we were already on win No. 15, a franchise record. With each passing game, the intensity and emotions grew. By the end, every night felt like a World Series matchup.

Excitement at that level in mid-September is almost unheard of in the sport, and as Bruce said, at a point where the season can start to get monotonous, the Indians had something to play for.

The streak was unlike anything that the city has ever seen. And even if the Indians go all the way and end up hoisting the Commissioner’s Trophy at the end of it all, the streak is something completely separate to be marveled at for generations to come.

Because for 22 days, Cleveland was the center of the baseball universe.