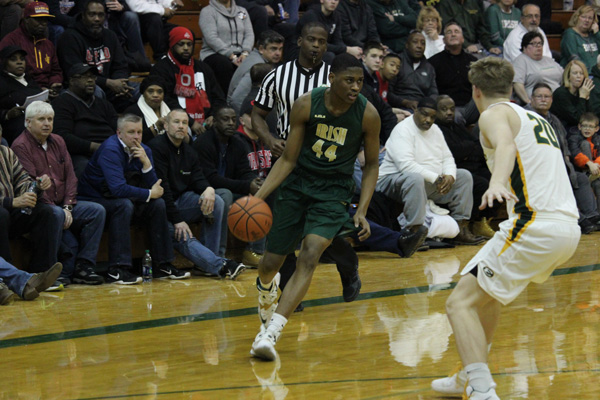 CANTON, OHIO– If you check the quarter-by-quarter scores, you’ll see that Revere outscored St. Vincent-St. Mary 41-40 in the final three quarters of Thursday night’s OHSAA Division 2 regional semifinal game at the Canton Civic Center. Unfortunately for the Minutemen, they laid an egg in the first quarter. A goose egg.

Tournament-tested SVSM did everything right in the first period and pitched a rare 17-0 shutout. Revere, in its first-ever regional appearance, had a debut to forget. Not only were shots not falling, Revere turned the ball over eight times in the first quarter and seemed completely disorganized.

The Minutemen finally got on the board 30 seconds into the second quarter when 6-foot-10 senior Pete Nance split a pair of free throws.

SVSM junior forward Darius Cone scored on a layup with 6:10 remaining in the second period, then stole the inbounds pass and scored again 10 seconds later. Those two baskets pushed the Fighting Irish lead out to 25-1, their largest advantage of the first half.

Nance scored the first field goal of the game for Revere with 5:00 to play in the second quarter. He added another basket later in the quarter, but found the going pretty rough on the offensive end throughout the game. He had 10 rebounds and three blocked shots, but scored only nine points.

Meanwhile, SVSM did a good job of spreading the floor on offense and sharing the wealth in the scoring column. Nine different players tallied points for the Irish, led by junior guard Lunden McDay with 12.

SVSM took their largest lead of the game when senior guard Scott Walter scored on a putback with 3:34 remaining in the third quarter, making the score 40-15.