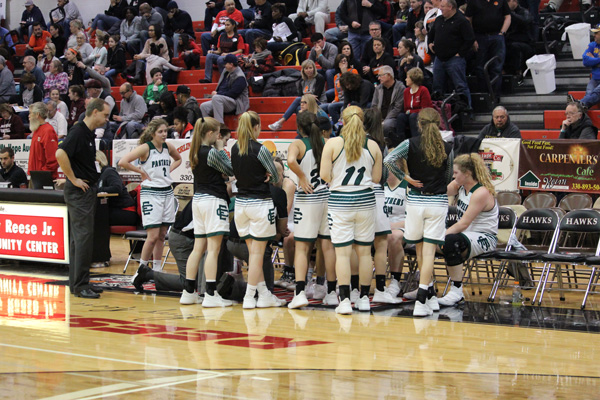 COLUMBUS– The Elyria Catholic girls basketball season came to an end at Ohio State on Thursday night as the Panthers fell to the No. 1 Versailles Tigers in the Division III state semifinals, 63-47.

Elyria Catholic was paced by junior Faith Williams, who recorded a game-high 18 points. Joining her in double-digits was Ally Winnen who contributed 13 points and grabbed 10 rebounds. For Versaille, Kami McEldowney recorded 17 points while Danielle Winner had a double-double with 14 points and 10 rebounds.

Winnen was the Panther who made the biggest dent on the glass, as Versaille won big on the boards, outrebounding EC 39-24. The Tigers especially dominated on the offensive glass, grabbing 14 second-chance boards.

It wasn’t a particularly good shooting night for either team, as the Panthers shot just 17-of-42 from the field, while Versaille went 21-of-47.

At the end of the first frame, Elyria Catholic was hanging tough and led 8-7. The Tigers would outscore the Panthers 17-11 in the second quarter, however, to take a 24-19 lead at the halftime break. They continued their offensive output to extend their lead to 10 entering the final quarter. In the final eight minutes, the Tigers sealed the deal by rattling off 23 points.

Elyria Catholic’s season ends 22-6, while the Tigers improve to 28-1 and advance to the state final against Columbus Africentric on Saturday at 2 p.m. It is Versailles’ fourth title game in five years.