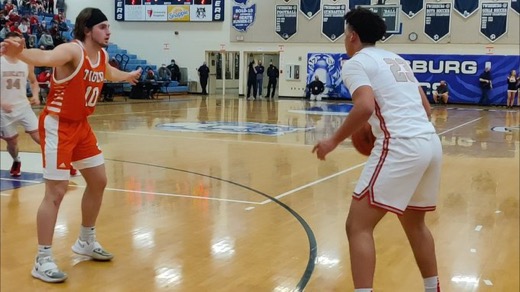 In the history of the Norwayne basketball program, they have never gone as far as the Elite 8 in the OHSAA State Tournament.

That changed in the Division III, Region 9 semi-final as they defeated Springfield Local 55-49 to advance to the regional final for the first time in the school’s history in Twinsburg High School.

“They had their target on their back from day one,” Bobcats’ coach Brian West said.

“Defending district champs from last year. (Last year) we’ve snuck up on some teams here and there. You can’t sneak up on anybody when you are the defending district champions. To turn that around and do that again and get to the Elite 8 for the first time in school history… it speaks a lot about our character.”

The special thing that spiced this game up was the added fire in the Bobcats players that played suited up for them on the gridiron as they were on the losing end of their playoff game against Springfield Local on a last-second trick-play, ending their season.

“I know that we all wanted a Round 2 with them. It’s been fuel everyday, since we found out. So it’s been really big for us to finally get to play these and get it a rest about the football season.”

The weight of the football loss is off their shoulders, but the Tigers did not let it come in easy.

After the Bobcats were up 6-3, Springfield showcased their quickness and physicality to go on a 11-0 run. Tigers’ Clay Medvec ran rampant scoring 8 of the team’s 11 points on the run.

Not only were the Tigers led in the second quarter, but Bobcats’ starting big-man Jacob Rupp had to be bench due to foul trouble.

“As physical as they were, we had a hard time keeping them in front of us,” West said.

“So we switched to zone (defense) and change of pace. We started getting buckets on the other end.”

6-0 run for the Wildcats in Q2. Defense playing a big role ⬇️ they trail 14-13@BobcatsSports pic.twitter.com/VGpptAZPkB

Norwayne proceeded to go on a 12-4 run in the second quarter to enter halftime tied up at 23-23, but West believed his team could play better.

“We did not play well at all in the first half,” he said.

The game was set to be a classic as there would be 14 lead changes between the two teams.

In the third quarter, Cunningham, a former football player showcased his presence with his playmaking and sharpshooting, nailing three of his four 3-pointers and dishing three assists to keep Norwayne in the game.

“(Cunningham) is a high-basketball IQ type of kid,” West said.

“He uses his body probably better than any kid I’ve coached as a guard. He’ll be the first to tell you that he isn’t going to wow you with his ball handling skill but he uses his body so well.”

He finished with 10 points.

In the fourth quarter, the Bobcats put Jacob Rupp back in the game, where he took over, scoring nine crucial points in a tightly contested game to finish with 11 points.

Springfield finishes their season with an 18-4 record.

Norwayne (22-4) advances to the Division III, Region 9 final against Lutheran East after they defeated Cardinal Mooney 74-31.