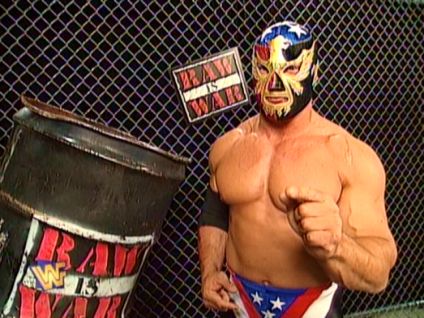 HEARTLAND, America – The WWE has had no shortage of patriotic wrestlers over the years, as it is usually the surest way to get a baby face over, unless your name is John Cena. With the Fourth of July right around the corner, we decided to take a deeper look. Here are some of the most patriotic gimmicks the WWE / WWF have been able to get over. Sometimes for a few months, sometimes for life!

Hacksaw Jim Duggan – He was a staple of Americana in the 1980’s as one of the WWF’s most popular stars. He was an instant fan favorite as he carried his trusty two by four and American Flag to the ring. He wasn’t exactly a technical marvel but the fans loved him anyway.

Lex Luger – This is a strange one because he never really did anything that even resembled American Pride until Hogan left, and the WWE needed a quick fix. The next thing you know, he has on flag fubazz pants and is slamming Yokozuna on the deck of the US Intrepid. The push failed and by the Summer of 1994, his gimmick was over. Atleast he had a really cool bus, and a fun trip across the country.

Ken Patera – He went to the Olympics, he was strong, he got arrested and that was the end of that.

The Patriot – Del Wilkes was great as the Patriot in the summer of 1997 when Bret Hart and the Hart Foundation needed a foil. He didn’t last much longer than that, but did headline a PPV with Bret at Ground Zero in September of 1997.

Sgt. Slaughter – In the early 80’s he was the picture of American Wrestling Pride! By the early 90’s, he was an Iraqi sympathizer before switching back to the good side after a pep talk from Hacksaw Jim Duggan.

Kurt Angle – Perhaps the greatest pure wrestler in the history of “Sports Entertainment”. He debuted in November 1999 and proceeded to dominate everything in his path for the next 12 months of his rookie year. He won every title you could think of in that year, including the King of the Ring. He dominated that year, and for the next six years of his WWE Reign. As the only true Olympic American Gold Medalist in pro wrestling history, he is without a doubt, the greatest American gimmick in pro wrestling history, for the simple reason it was not a gimmick!

Hulk Hogan – For a long time, he may have been the greatest American Icon in wrestling history. Then in matter of months he filmed a sex tape, and hated on minorities. That pretty much ended that quickly.

Jack Swaggar – We the people, a flag on your tights and a great mouthpiece in Zeb Colter. He had everything needed to get over with the fans, he just didn’t win.

Dusty Rhodes – He was the son of a plumber who slept in the alley and dined on pork and beans. If that is not truly the American dream, then I’m not sure what really is.