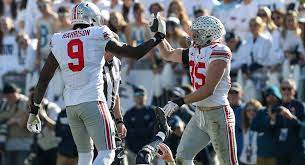 The trio headline a contingent of 13 Buckeyes on defense or special teams honored today by the league.

Eichenberg, a finalist for the Lott IMPACT Trophy, has led the team in tackles all season and currently ranks third in the Big Ten with 112 total stops. His 72 solo tackles are first and his 12.0 TFLs rank sixth. Eichenberg is a fourth-year player from Cleveland. He was named first-team on both the coaches and media ballots.

Harrison, a fourth-year senior from Olentangy, leads all Ohio State defensive linemen with 30 tackles and with six quarterback pressures. He has 6.5 tackles-for-loss (26 yards) and three sacks, in addition to four pass break-ups and three forced fumbles. He was named first-team by the media.

Tuimoloau, from Edgewood, Wash., has been dominant along the line this year, recording 28 tackles and 10.5 tackles-for-loss (39 yards) to rank second on the team. He also has 3.5 sacks, two interceptions four quarterback hurries and two pass break-ups. He was named first-team by the head coaches.