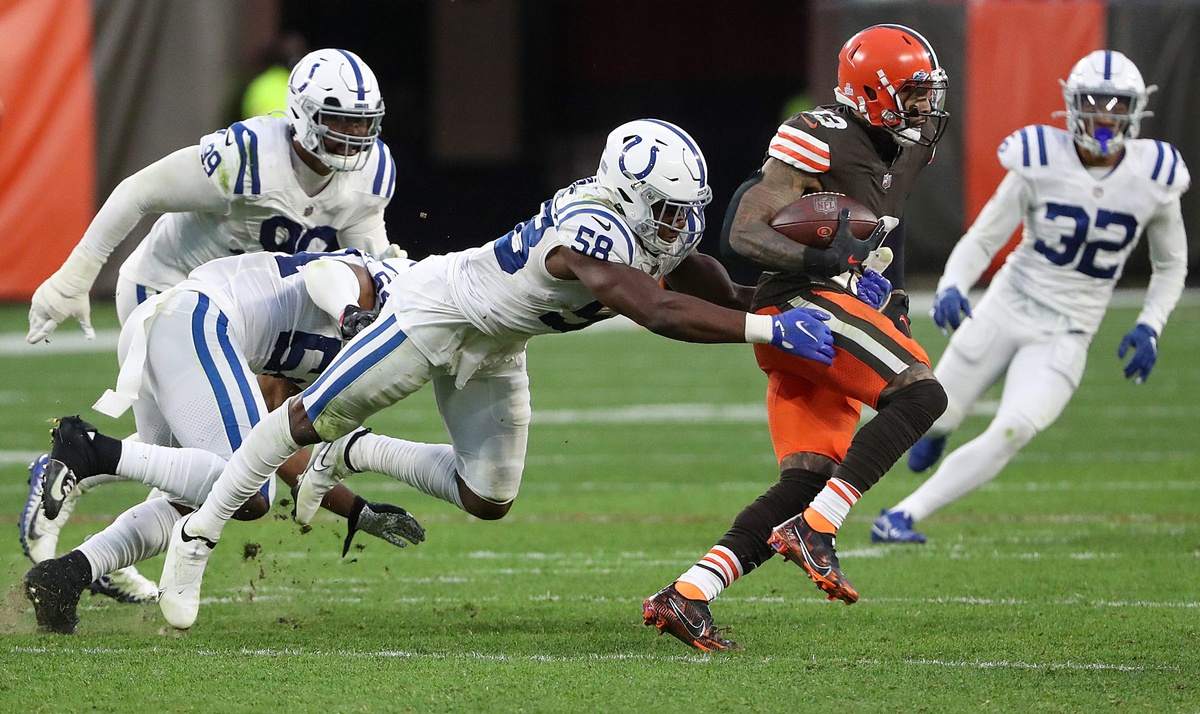 The Cleveland Browns hosted the Indianapolis Colts Sunday afternoon at FirstEnergy Stadium, looking to improve to 4-1 on the young season. Baker Mayfield threw two interceptions in the game, but helped lead the Browns offense over the 30 point mark once again, as the Browns beat the Colts 32-23.

The Browns opened the game on offense putting together an impressive drive deep into Indianapolis territory. However, two straight incompletions from Mayfield halted the drive in a goal to go situation, forcing the Browns to settle for a field goal.

On the other hand, the Colts took their opening drive right down the field, punching it in the end zone with running back Jonathan Taylor from four yards out to take a 7-3 lead over the Browns.

Mayfield found five different receivers on the next drive, as he led the Browns down the field on a 14 play drive. Mayfield found Kareem Hunt in the end zone to cap off the drive, taking back the lead at 10-7.

After the Browns’ score went into the second quarter, the Browns defense still struggled to stop Philip Rivers and the Colts offense, as they drove all the way to the Cleveland 14 yard line. To no avail, as a third down incompletion forced the colts to settle for the tie after a Rodrigo Blankenship field goal.

Following the tie, Mayfield carried the Browns offense down the field again, using both his arm and legs, before finding Rashard Higgins for a 15 yard touchdown to make the score 17-10 after the extra point.

After taking the lead, the Browns defense stood tall for the first time in the game, forcing a three and out to give the offense a chance to score just before halftime.

The Browns took their time on the drive, putting together a 12 play drive that lasted four minutes to add another field goal with 13 seconds left in the half. A Rivers’ kneel down spelled the end of the half following the Browns’ score.

The Browns opened the second half on defense with a 20-10 lead. It took only five plays to extend that lead however, as Ronnie Harrison intercepted Rivers’ pass and took it all the way back to give the Browns a 27-10 lead.

However, a special teams blunder cost the Browns following the interception, as Isaiah Rodgers took the kick off return to the house to cut into the Browns lead.

The Browns offense looked to bounce back after the touchdown return, however after driving near midfield, Mayfield would be intercepted by Bobby Okereke, as the Colts took over in Browns’ territory.

Despite the good field position, the Colts would only be able to get to the Cleveland 19 yard line, before being forced to settle for a field goal by the Browns defense.

The Browns offense returned to the field to take the ball just barely into Indianapolis territory, before two straight Mayfield incompletions forced a Jaime Gillan punt at the beginning of the fourth quarter.

The punt pinned the Colts offense back at their own four yard line, as the defense looked to keep the Colts offense at bay. An intentional grounding in the end zone from Rivers helped them do just that, as the Browns defense forced a safety to take a 29-20 lead.

After the punt kickoff as a result of the safety, the Browns offense failed to move the ball, going three and out to punt the ball back to the Colts.

Rivers was driving the Colts near midfield in the ensuing drive, before Sheldrick Redwine intercepted a ball deep down the middle to give the Browns offense the ball near midfield.

The offense failed to take advantage of the good field position, as Mayfield was intercepted for the second time five plays later by Anthony Walker.

Following the interception, Rivers and the Colts offense put together another impressive drive to pull within six of the Browns. The drive took 12 plays and just over four minutes, but was halted at the Cleveland 11, after two incompletions on first and second down before a four yard pass forced a fourth and six and a field goal try.

The Browns now only led by six points and needed to run some clock while also working to extend the lead. Hunt and D’Ernest Johnson obliged, combining to move the ball down near the red zone, before Parkey extended the lead to nine after a 46 yard field goal with 21 seconds left in the game.

With the game in hand barring a last second miracle, the Browns defense took the field to strangle all hope for the Colts, doing just that to hold on to win 32-23 and go to 4-1 on the season.

The Browns Win Against The Cowboys Show That They’re Playing For Keeps
NFL News: Around the Gridiron