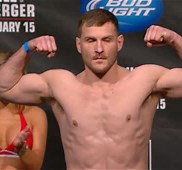 UFC officials announced on Sunday that back injury has forced former heavyweight champ Cain Velasquez to pull out of a planned Feb. 6 match with current champ Fabricio Werdum, and Stipe Miocic has been called upon as a short-notice replacement.

Miocic, a graduate of Eastlake North High School, trains in Independence and lives and works as a firefighter and paramedic in Valley View. He wrestled and played baseball at Cleveland State University.

Mat Insiders: Two Indy Wrestling Promotions Take to the Mat in NE Ohio This Weekend
Breaking News: Daniel Bryan reportedly tried to give WWE notice of his decision to retire, but Officials denied his request