Observations from A.I.W.’s “We’ve Got A Dilemma” Show in Cleveland 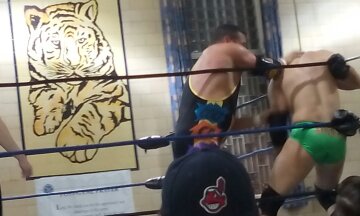 I took in a great card tonight on Detroit Avenue in Cleveland, Ohio featuring a former WWE alum. This is the first time I have gotten a chance to take in a show from the company that first brought you Johnny “Wrestling” Gargano. Here’s what went down…..

The show opened with a match that I only caught the pinfall due to parking being so packed, so my apologies.

This was the first full match I was, and it was my choice for match of the night.  The match started out with a nice exchange of chops between Justice and Tankman. Lyndon turned an hurricanrana into an armbar on Donst. Tankman caught Justice mid-air, hoisted him over his shoulders, and threw him over the top rope. Donst hits a nice through the ropes plancha spot on Justice, Lyndon climbed Tankman’s back while he’s on the apron, then moonsaulted off of his back onto justice and Donst. Calvin Tankman (a near 300 lb. hoss of a man) then hit an amazing flipping over the top rope spot on all three of the other wrestlers. Tankman then proceeds to miss Donst with a top rope moonsault, then Justice got suplexed on top of him from the top rope by Donst. Tankman later got his revenge by catching Donst mid air and driving him into the mat with a powerbomb. Lyndon hit a reverse inverted hurricanrana on Tankman. Justice ends the match with a top rope flying knee strike to the back off the head of Donst for the three count.

The match started out as a comedy match, with lots of in ring miming of each other. The action starts to pick up when Cabana goes off on a head of steam, which leads to a top rope-bounce off the mat splash on Friedman. Cabana catches Friedman with a drop toe hold onto an open chair. Then Cabana pulls out another chair to start spanking Friedman with the ref’s belt, to the crowd’s chant of “WHO’S YOUR DADDY?”. Then the ring announcer returned the ring with an manilla Envelope and proceeded to read off paternity test results that stated in fact, that Cabana really is Friedman’s father. This funny spot ends with the two hugging it out. Until Friedman threw a cup of water in Cabana’s face, and used a school boy roll up for the pinfall.

This match ended with Lawlor tying Garrini up with his own black belt around his arms, Then hits him with an unprotected styles clash for the win to remain undefeated.

Most of the early portion of the match Swoogle got dominated by Dedication Personified. The match starts to pick up when Swoogle kicked Carson in the crotch, hit him with a stunner, and made the hot tag to Smooth. Smooth comes like a house on fire, clearing the ring. Twins retain the titles after Smooth hit Rockingham with a sit out chokeslam for the three count victory.

The match starts out very mat wrestling like: collar and elbow, exchanging one count pin attempts. Starts to pick up when Dashwood caught Baker with a hangman’s neckbreaker through the ropes on the apron. After catching Dashwood with a strike on the outside of the ring, Baker starts to show off by drinking a beer from the crowd. Until Dashwood hit her in the face with an open can of beer. This leads to a two count in the ring. Discus clothesline by Dashwood on Baker for a 2 count. Baker hit Dashwood with a running neckbreaker, followed by a running slingblade off of the ropes by Baker on Dashwood, which turned into a submission lock The match ends when Dashwood connects with Baker on a running dropkick/big boot off of the ropes for the pin and subsequent win.

A very lively, high spot charged match involving many over the rope planchas, D.D.T.’s, some tag team high flying attacks that spilled into the crowd. Even a top rope lumbar check. The match ends with a busted open Magnum CK landing a flying elbow drop for the pinfall. A very fun match that reminded me of the New Japan Pro Wrestling matches featuring the guerillas of destiny and all of there non stop swearing in there opponents faces. The Production began to jump the remaining members of No Consequences still in the ring after the match until Josh Prohibition came out to make the save with a steel chair.  Then Prohibition turned on Joshua Bishop (the man he just saved) with a scaving promo, and a chair shot to the back. Prohibition challenged Bishop to a one on one match on March 10th at the Tadmore Shrine in Akron,Ohio.

The match starts out with a sneak attack by DJZ onto Janela before the bell rung DJZ dominates the early portions of the match. Janela catches DJZ with an exploder suplex in the turnbuckle. Nice drop toe hold lock by DJZ before Janela can reverse the hold. They start trading reverse schoolboy pin attempts on each other until they started rolling Around the ring like a human ball. Both got up dizzy. DJZ and Janela trade superkicks, and forearm strikes until both collapse from the blows. But both men beat the ten count. Nice running seated powerbomb by Janela on DJZ Piledriver by Janela on DJZ for a two count. The match ends with Janela hoping over the top rope with a leg drop on DJZ for the three count pin.

Gage starts the match via sneak attack Williams. Then begins to choke him out with his t-shirt The early parts of the match were owned by Gage. Williams reverses the momentum with a vicious chop, then catches Gage with a powerslam off of the ropes Running clothesline on a tired Gage in the corner by Williams leads to a top rope suplex for a two count. Williams hits a nice 619 spot on a running Gage Gage reverses a running Williams into a running powerbomb, but is too spent from the match to make a cover. Williams hit Gage with a nice looking D.D.T. reminiscent of Jake the Snake. Gage catches Williams with a cold piledriver, but goes for a second one that got reversed into a piledriver of his own by Williams onto Gage. A flapjack into the corner, into a lumbar check, into a flipping shoulder breaker on Williams for the win by Gage to retain the title.

The next A.I.W. show “Enter The Dragon” will take place March 10th, 2018 from the Tadmore Shrine in Akron, Ohio.