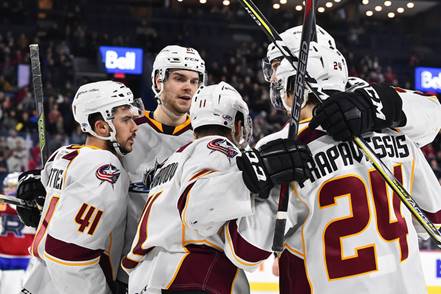 LAVAL, QC – The AHL’s Cleveland Monsters defeated the Laval Rocket in a shootout on Saturday at Laval’s Place Bell by a final score of 5-4. With the win, the Monsters are now 19-16-4-1 overall this season and with 43 points, now reside in fifth place in the AHL’s North Division standings.

Cleveland’s Kole Sherwood delivered the Monsters a 1-0 lead with an even-strength tally at 1:37 of the opening period withEric Robinson and Zac Dalpe collecting assists on the play. The Rocket responded, however, to tie the game at one at 6:12of the first, courtesy of a five-on-five finish from Alex Belzile, before Cleveland’s Mark Letestu placed the Monsters back in front at 16:45 with a power-play goal set up by Justin Scott and Alex Broadhurst.

In the middle frame, Rocket blue-liner Xavier Ouellet leveled the score at two at 14:10 with a four-on-four conversion, but Cleveland grabbed their third lead of the contest at 17:16 when Vitaly Abramov tallied an even-strength marker following a slick passing play from Maxime Fortier and Sam Vigneault.

The third period saw Laval rattle off back-to-back even-strength goals from Daniel Audette at 12:12 and Alexandre Grenier at 15:21 before Cleveland’s Ryan Collins notched his first career professional goal at 16:51, assisted by Scott and Abramov, to force overtime at 4-4. After a scoreless extra session, the Monsters and Rocket took part in a four-round shootout until a Broadhurst goal in the bottom of the fourth round lifted Cleveland to a 5-4 victory.

Monsters goaltender Jean-Francois Berube stopped 36 of the 40 shots he faced, along with three of four in the shootout, to improve to 12-12-3 this season while Laval’s Connor LaCouvee fell to 4-1-1 in net following a 34-save performance.

Next up for the Monsters, it’s a Wednesday home clash vs. the Toronto Marlies with full coverage, live from The Q, underway at 7:00 pm on Alt 99.1, AHLTV and the Monsters Hockey Network