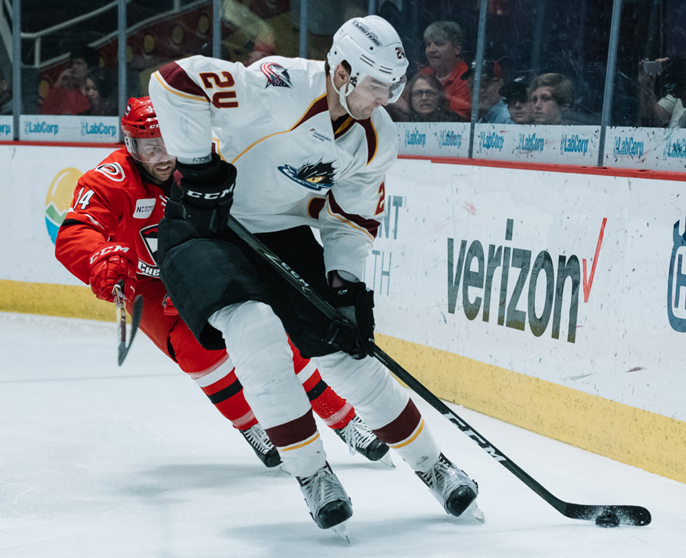 CHARLOTTE, NC – The AHL’s Cleveland Monsters were defeated by the Charlotte Checkers on Saturday at Bojangles Coliseum in Charlotte, NC, by a final score of 6-1. With the loss, the Monsters fell to 24-23-3-4 overall this season and with a .509 points percentage, currently sit alone in sixth place in the AHL’s Central Division standings.

Charlotte built a 2-0 lead in the opening period by collecting back-to-back even-strength goals from Jake Chelios at 4:35 and Dennis Robertson at 15:51.

Then in the second, three more five-on-five tallies, from Lucas Wallmark at 1:54, Patrick Brown at 2:24 and Chris Newbury at 2:51, made it 5-0 Checkers before Cleveland put themselves on the board at 17:33 with an even-strength tally from Jordan Maletta, courtesy of Daniel Zaar’s lone assist.

In the third, Wallmark posted his second goal of the game at even-strength at 15:00 of the period to establish the Checkers’ final margin of victory at 6-1.

Cleveland net-minder Brad Thiessen fell to 2-5-1 overall this season after stopping seven of the 11 shots he faced before being pulled in favor of Anton Forsberg early in the second period, with Forsberg proceeding to deliver a 19-save performance in relief.

On the other side, Charlotte’s Daniel Altshuller improved to 4-3-0 between the pipes by virtue of a 26-save showing.

Next up for the Monsters, it’s a Tuesday home clash vs. the Grand Rapids Griffins with full coverage, live from The Q, underway at 7:00 pm on 99X and the Monsters Hockey Network.