Monsters Can’t Climb Out Of Early Hole, Lose To Rockford 5-2 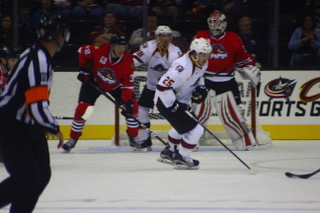 The Monsters looked to rebound today against the Rockford IceHogs, as the second road game for the Monsters would be against the team they have had success against as of late. The Monsters have won five in a row against the IceHogs, dating all the way back to the playoffs last year.

The game didn’t start off the way the Monsters would have liked. After a few penalty box visits, the third penalty of the game on Aaron Palushaj came back to hurt the Monsters. The IceHogs’ Kyle Baun were able to score on the power play at the 9:00 mark of the period, the first time the Monsters have allowed a power play goal this year. The IceHogs were able to score one more time in the period, as Martin Lundberg scored to make it 2-0 in favor of Rockford.

In the second period, the Monsters gave up their second power play goal of the game and season, as Daniel Zaar’s penalty for holding the stick helped the IceHogs take a 3-0 lead. This was the second time in two nights the Monsters faced a 3-0 deficit. Just like last night, the Monsters came roaring back. Goals by Aaron Palushaj and Daniel Zaar made it a 3-2 game going into the third period.

In the third period, the IceHogs were able to find an opening once again. They scored a goal off of a Brandon Mashinter shot attempt, which put the Monsters in a 4-2 hole. Cleveland went scoreless for nineteen minutes before pulling goaltender Brad Thiessen. The IceHogs foiled the Monsters’ plans for an extra attacker, as they scored once more to make it a 5-2 Monsters loss. The Monsters have an off day tomorrow and then travel to Iowa to complete their road trip.