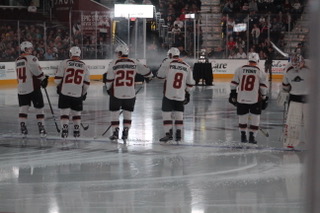 The Cleveland Monsters went on their first road-trip this year, as they plan to make stops at Grand Rapids, Rockford and Iowa. The first stop on the trip was to Grand Rapids, Michigan to take on the Griffins. The Monsters last saw the Griffins in playoff play last year, where they were able to defeat the Griffins in six games during their Central Division Final. The Monsters were reunited with a familiar face on Saturday, as Oliver Bjorkstrand looked to make his Monsters’ season debut. Bjorkstrand was a big part of last year’s Calder Cup championship team, so he would look to make an impact immediately.

After a very defensive start to the game, Brett Gallant put the Griffins on the power play when he was put into the penalty box for elbowing. As they have done so far this season, the Monsters killed the penalty. The Monsters had a power play opportunity at the 12:23 mark from a slashing penalty on the Griffins, but the team but could not capitalize. It was a very well-played period, which had the offenses trying to figure out a plan to score.

Grand Rapids scored right at the start of the period, as Robbie Russo scored at the :29 mark. Tyler Bertuzzi had another assist, his second of the night. The Monsters looked like they were going to be held scoreless by Jared Coreau until Alex Broadhurst scored to make the game a 3-1 Grand Rapids lead. The time left was very encouraging, as the Monsters had a little over seven minutes left in the game. Broadhurst scored to make it 3-2 with less than a minute to play and the Monsters had one final chance. The Monsters failed to score the tying goal, as their rally was cut short. Grand Rapids would survive the Monsters’ comeback attempt and win tonight’s game 3-2. The Monsters are now 2-1 on the young season and look to rebound tomorrow against Rockford. The game is scheduled for 5pm and you can listen to the game on 99X.