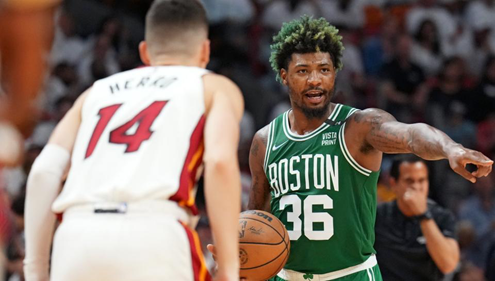 Miami – After sitting out of Game 1 due to a midfoot sprain that he endured in Game 7 of the series against the Milwaukee Bucks, Marcus Smart returned to the Celtics lineup Thursday night for Game 2 of the Eastern Conference Finals. Throughout the game, he showed why he is a pivotal part of this Celtics team.

The Celtics got off to a slow start, trailing Miami 18-8 five minutes into the 1st quarter. The slow start did not last long though. With the help of some good team defense and lights out shooting, Boston jumped out to a 35-24 lead at the end of the quarter. Boston tied a playoff record with nine 3-pointers made in a quarter by draining nine of their own in the 1st.

The 2nd quarter was all Jayson Tatum and the Celtics. Tatum dropped 17 of his 20 first half points in the second quarter. Smart lent a helping hand on offense as well, tallying 7 assists in the first half without committing a turnover. By the end of the 1st half, the Celtics held a lead of 70-45 over the Heat.

The Celtics did not give the Heat any hope in the second half. The closest they would come to the Celtics, was in the 3rd quarter when they trailed by a score of 82-65. However, the Celtics completely took over the game after that point. Smart continued his offensive output by putting up 17 of his 24 points in the second half.

Smart ended the game with a near triple-double. He had a stat-line of 24 points, 12 assists, and 9 rebounds. Smart put together a box plus-minus of +31 while he was on the court. He also showed why he won this year’s NBA Defensive Player of the Year Award, by picking up three steals to go along with one block. He was the first Point Guard to take home the award since Gary Payton did so with the Seattle Supersonics in the 1995-1996 season.

The final score of the game was 127-102 with the Celtics taking a big game as the series shifts to Boston for Games 3 and 4. With the series tied at one game apiece, the Celtics look to take advantage of home court, and give themselves a commanding lead in the series. Game 3 will be on Saturday, May 21st starting at 8:30PM EST.