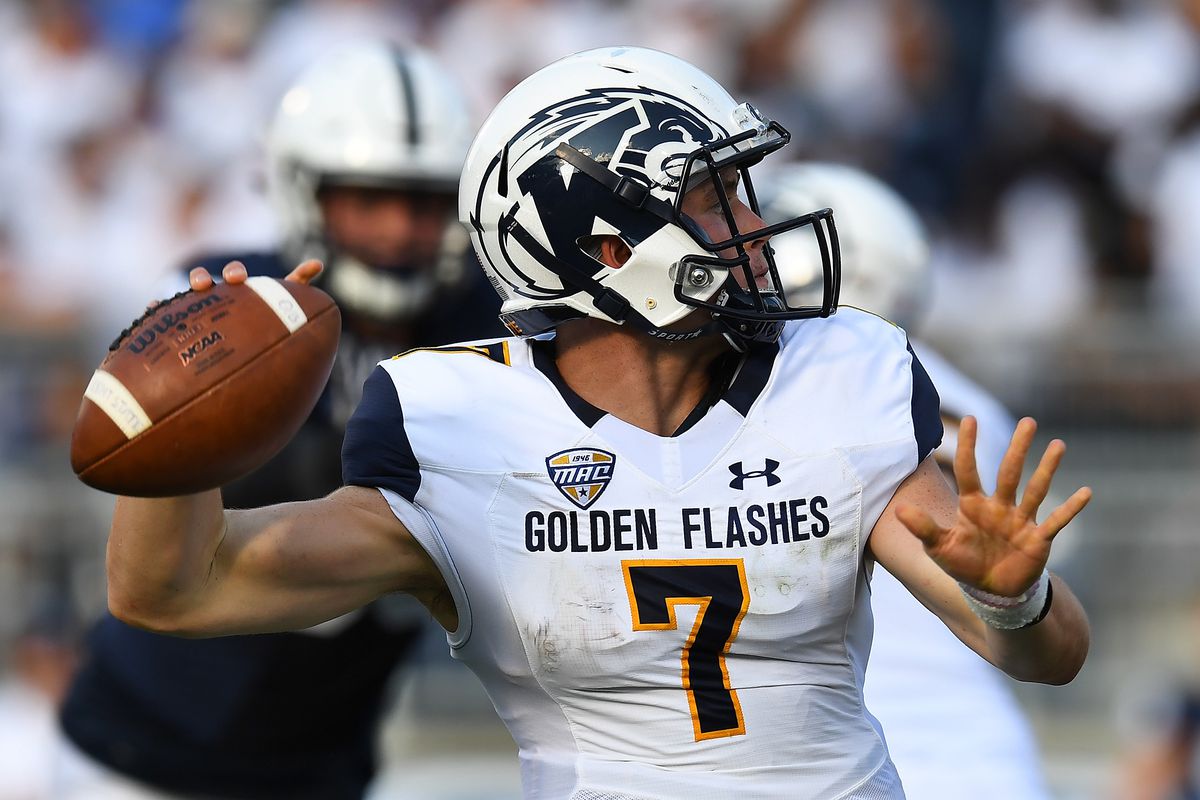 MAC QUICK NOTES:
• Week 12 features the continuation of midweek MACtion with four midweek games and one Saturday contest. Week 12 begins with one game on Tuesday, Nov. 13 at 6:00 pm with Western Michigan at Ball State (ESPN2), two games on Wednesday, Nov. 14 with Buffalo at Ohio (ESPN2) at 7:00 pm ET and Miami at Northern Illinois (ESPNU) at 8:00 pm/7:00 pm CT, while Thursday, Nov. 15 will feature Toledo at Kent State (CBS Sports Network) at 6:00 pm ET. Saturday, Nov. 17 will witness Bowling Green at Akron at 3:30 pm ET (ESPN3).
• On Wednesday, Nov. 14th both the East and West Division winners may be determined. Buffalo can clinch the MAC East Division with a win at Ohio (ESPN2), while Northern Illinois can clinch the MAC West Division with a win over Miami (ESPNU).
• Eastern Michigan (6-5) joins Buffalo (9-1), Northern Illinois (7-3), Ohio (6-4) and Western Michigan (6-4) as MAC programs bowl eligible. Eastern Michigan became bowl eligible with a 27-7 win over Akron on Nov. 10, as the Eagles are bowl eligible for the second time in three years. Toledo (5-5) needs one more win to reach bowl eligibility.
• In MAC crossover games this season, the East and West Divisions are tied, 7-7. In each of the last eight consecutive years (2010-2017), the MAC West Division has topped the East Division in regular season head-to-head crossover games.

MIDWEEK MACTION CONTINUES DURING WEEK 11
Midweek MACtion continues this week with games on Tuesday, Wednesday and Thursday with four games during the week and one game on traditional Saturday afternoon. The week begins on Tuesday, Nov. 13 at 6:00 pm ET with Western Michigan at Ball State (ESPN2), while Wednesday, Nov. 14 will feature Buffalo at Ohio (ESPN2) at 7:00 pm ET and Miami at Northern Illinois at 8:00 pm ET/7:00 pm CT (ESPNU), while Thursday, Nov. 15 will feature Toledo at Kent State at 6:00 pm ET (CBS Sports Network).

The MAC began midweek football in 1999 and this season marks the 20th year of playing during the week. During the 2018 season, the MAC will have 16 games nationally televised on either ESPN2, ESPNU or CBS Sports Network on Tuesday, Wednesday or Thursday during the last five weeks of the regular season.

MAC WEEKLY NOTES
• Northern Illinois (7-3, 6-0) won its sixth consecutive game with a 38-15 win over Toledo on Wednesday, Nov. 7 as the Huskies remain in first place in the MAC West Division. NIU had a season high 38 points and matched a season-high 296 yards rushing as running back Tre Harbison had 139 yards rushing and Marcus Jones added 103 yards. Huskies quarterback Marcus Childers was 13-19 passing for 131 yards and added 58 yards rushing.
• Buffalo (9-1, 6-0) rushed for a season-high 358 yards in a 48-14 win over Kent State on Nov. 6 and improved to 6-0 in league play for the first time since joining the MAC in 1999. Buffalo scored on its first four possessions as running back Jaret Patterson led with 187 yards rushing and two touchdowns, as his 187 yards rushing were the highest single-game rushing total by a freshman in school history.
• Eastern Michigan won its fourth consecutive MAC game and became bowl eligible with a 27-7 win over Akron on Nov. 10. The Eagles defense led the way by posting in second straight defensive shutout and held the Zips to 90 yards of total offense and forced 10 three-and outs. Eastern Michigan defensive end Maxx Crosby led with eight tackles, three tackles for loss, one sack and an interception returned for a touchdown.
• Miami (4-6, 4-2) posted a 30-28 win over Ohio on Wednesday, Nov. 7 for the program’s first win over the Bobcats since 2012. Miami quarterback Gus Ragland was 20-32 passing for 199 yards and one touchdown.
• Bowling Green posted its second win of the season as the Falcons overcame a 13-0 halftime deficit at Central Michigan by holding the Chippewas to 29 yards of offense in the second half. Bowling Green used a fake punt, onside kick and fake field goal to outscore Central Michigan 24-0 in the second half for the 24-13 final.

MIAMI AND NIU CREATE THE INAUGURAL MALLORY CUP
The inaugural Mallory Cup between Northern Illinois and Miami is Wednesday, Nov. 14 at 8:00 pm ET/7:00 pm CT on ESPNU at Huskie Stadium. The Mallory Cup honors the late Bill Mallory, who coached both teams to MAC Championships during a Hall of Fame career. NIU is planning multiple events throughout Wednesday night’s game to honor Mallory, who is a member of the NIU, Miami and MAC Halls of Fame.

He passed away on May 25, 2018. More than 50 of Mallory’s former NIU players, who are among the thousands of “Mallory Men,” who played and coached with Mallory at four different schools during his 27 years as a head coach, along with Mallory’s widow, Ellie, daughter, Barbara Mallory Britt, and former Huskie head coach Joe Novak and his wife, Carole, will be in attendance on Wednesday night.