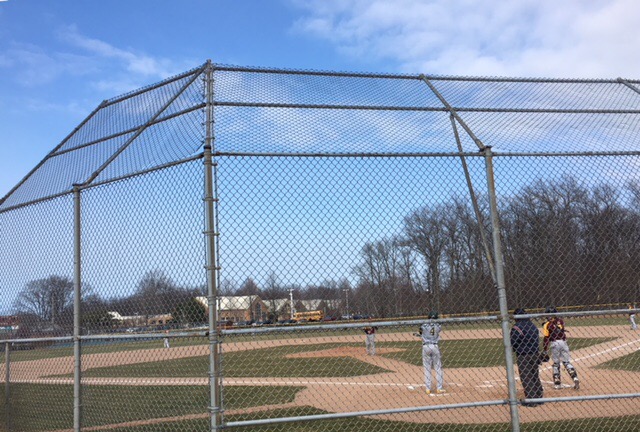 AVON LAKE, OHIO – Southwest Conference rivals, Avon Lake and Amherst met on a cold, chilly day at Avon Lake High School. Behind a complete game shutout by Avon Lake Shoremen pitcher, Jacob Krukowski, the Shoremen had a fine showing in a game that seemed to get colder by the pitch. “Playing here is cooler, especially early in the season with the wind coming in off of the lake,” said the Avon Lake Head Coach when speaking about if the weather was a factor in the game.

Krukowski and Amherst pitcher Jack Faight made quick work of the three hitters they faced in the first to start of the game, setting them down in 1-2-3 order. Amherst’s #6 batter, Gabe Solak, was the first batter to reach base, via a walk in the top of the second.

The Amherst first baseman, who dropped a ball on an attempted groundout, made up for it by snagging a rocket off of the bat of Avon Lake’s Alec Negron, and stepping on first to double-up the Shoremen’s Aidan Jantz in the process, ending the first real threat for either team.

Both pitchers continued their strong starts in the third. However, both team’s hitters started to make adjustments and the opposing pitcher work a little more, as two of the three hitters for both teams got the count to 3-2 before being retired.

A runner finally reached second base in the bottom half of the third via two straight walks by Jackson Armbrecht and Kai Kuwalu of Avon Lake.They loaded the bases on the very next pitch on a terrific bunt single by Jacob Carabello and Aidan Flinn singled home a run of the game to make it 1-0 Shoremen. However, an excellent throw by the Amherst centerfielder, a la Bradley Zimmer, and a terrific tag by Amherst catcher Hunter Cassidy ended the rally.

The strong pitching by both teams continued into the middle innings, as both teams managed only one hit a piece through the fifth inning. Amherst had their leadoff hitter reach base for the first time in the game when the Avon Lake right fielder lost a fly ball off the bat of Evan Shawver in the sun and let it fall into right field. Shawver, a Cincinnati recruit and potential MLB draft pick, stole second and put the Comets in a position to tie the game, but a fly ball to left ended the threat.

Avon Lake had three of hteir first foiur batters reach base via a walk, single and HBP, respectively. A walk byFlinn brought in another run for the Shoremen and was the end of the day for Amherst Pitcher Faight. Kyle Dalzell was brought in to relieve Faight and had a little trouble controlling his pitches, as three of his first four pitches ended up in the dirt, but Cassidy did a great job of blocking them and only letting one reach the backstop.

Avon Lake’s Jantz hit a sac fly to push the lead to 3-0. Ethan Shepard was brought in to pinch-run for Armbrecht in the bottom of the sixth, but was promptly picked-off to end the inning.

There was an argument between the umpires and the Amherst coaches, as it appeared that Amherst’s Ryan Glowacki had reached first via an infield single when Jantz, who was playing first base, had taken his foot off of the bag. The Avon Lake coach then motioned for the umpires to check with one another and after conferring, Glowacki was called out, much to the chagrin of the Amherst coach, who voiced his displeasure at the call.

A fly out to left ended the game and a masterful, complete game, shutout performance by Krukowski. The Avon Lake coach had this to say about the victory, “Amherst has recently been at the top of our conference. Any time that we can get a lead against them, we have to take it and run. Krukowski was great for us today. It seemed like a lot of the hitters he faced were 0-1, 0-2 counts.”

With the win, Avon Lake goes to 2-1 on the season while Amherst falls to 6-3. Both teams will play tomorrow as Avon Lake will travel to Victory Sports Park to face North Olmsted and Amherst will travel to Lakewood.