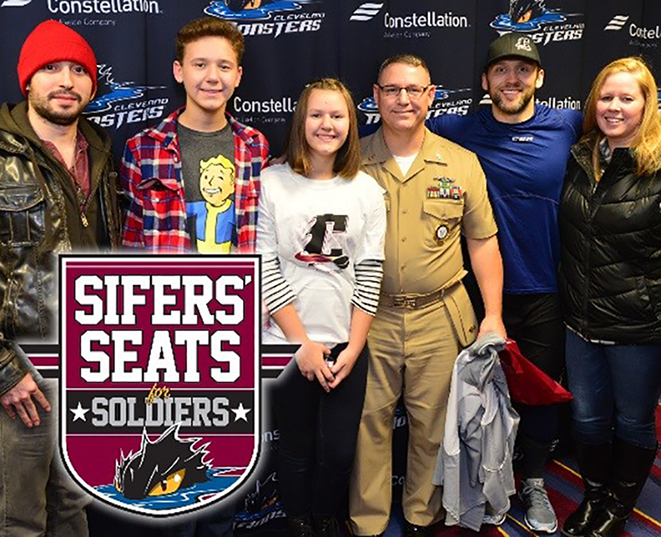 CLEVELAND – The AHL’s defending Calder Cup Champions, the Cleveland Monsters, proudly powered by Constellation, are proud to announce that Jaime Sifers has been named the team’s winner of the IOA/American Specialty AHL Man of the Year award for his outstanding contributions to the greater Cleveland community during the 2016-17 season, specifically through his signature “Sifers’ Seats for Soldiers” campaign, presented by the Ohio Lottery.

Serving as one of the Monsters’ assistant captains for the second-consecutive season, the 11th-year blue-liner hosted a Military family at each Friday-night Monsters home game during the 2016-17 season with help from the Monsters Community Fund, the Cleveland VA Medical Center and Ohio Military Family Connection.

Citing the service records of multiple members of his immediate family, including his father’s service in the Marine Corps and both of his grandfathers’ service in the Army and Navy, respectively, Sifers says supporting veterans and their families is something that he sees as being of vital importance. “These are the men and women that protect us on a daily basis and allow us the ability to do what we do every day,” said Sifers following Cleveland’s Veterans Day Tribute game on November 11, 2016. “We can’t thank them enough.”

Following each Friday home game in 2016-17, Sifers met with that night’s recipient family, provided them with a behind-the-scenes tour of the Monsters’ locker room, signed exclusive souvenirs, posed for photos and spent time talking with the veterans and their families. “I’ve always had very strong feelings and a connection to the military and what they do daily,” said Sifers. “They’re sacrificing so much more than we are and I think that’s one of the things this country and our team and our fans need to recognize.”

Sifers is now one of 30 finalists for the AHL’s 2016-17 Yanick Dupre Memorial Award, honoring the overall IOA/American Specialty AHL Man of the Year. The league award is named after the former Hershey Bears forward and AHL All-Star who died in 1997 following a 16-month battle with leukemia. The winner of the Yanick Dupre Memorial Award will be announced by the American Hockey League at a later date.