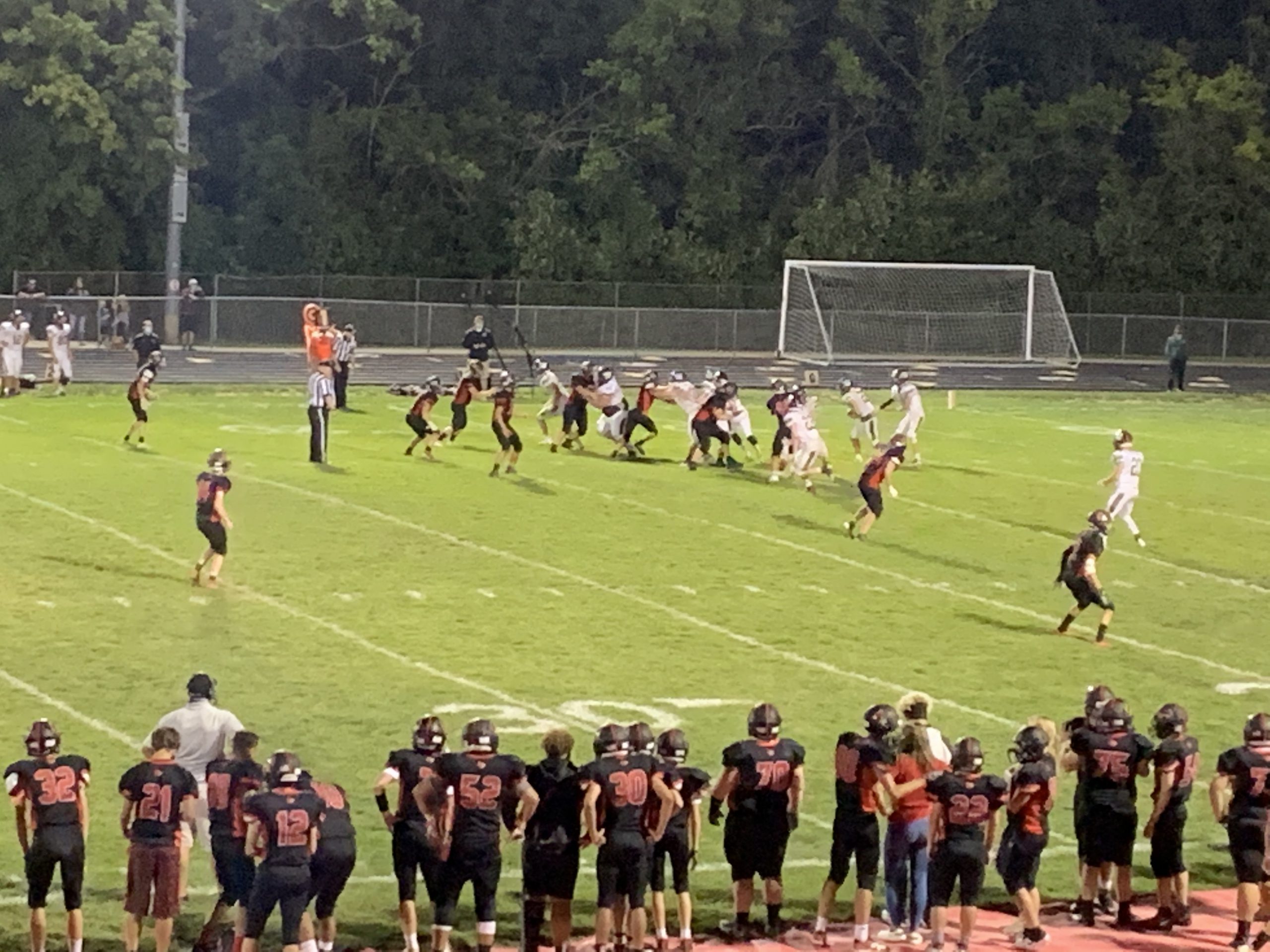 SHEFFIELD VILLAGE, OHIO – On a beautiful night in Sheffield Lake, the Dukes of Wellington High School came to take on the Brookside Cardinals in a game that would go down to the wire, as the Cardinals took home a memorable 28-26 win.

The game got off to a very odd start, as Wellington kicked from Brookside’s 45-yard line due to a delay of game penalty. The penalty was from the Brookside band who apparently were on the field for too long.

Brookside started from their own 20 on a touchback, the offense was moving pretty well until Brookside QB Kenny Grobolsek threw an interception to Wellington CB Justin Yeager.

Wellington then turned their interception into a score off a Jayden Skinner QB sneak with 6:16 left in the first, making the score 7-0 Dukes after the PAT.

Skinner came out looking very well throwing the ball for the Dukes, even on the run Skinner managed to compete a 62 yard pass to receiver Ty Moore to set up the offense with great field position.

All the way through the second quarter, both offenses were getting into a good grove, but couldn’t get anything going until it was Michael Gomes for Brookside running it from the 10-yard line, making the score even at 7 a piece with 2:16 left in the half.

Brookside gained another huge momentum shift when Ryan Scott came up with a big interception. Not too long after Wellington defender Jayden Skinner returned the favor with an interception of his own.

With just 11 seconds left in the half Wellington extended their lead from a Jayden Skinner touchdown pass, we heard that name quite often, as he was all over the field on both sides of the ball in the first half.

It wasn’t over yet with 9 seconds left, Brookside returner Andre Gardner gave the Cardinals great field position, crossing the 50, along with some help from the late hit penalty he drew running out of bounds.

Brookside’s O’Donnell then kicked a 33-yard field goal, at halftime the score was 13-10, with the Dukes in the lead.

As we entered the second half Jayden Skinner continued to sling the rock through the air right away, Skinner is very good at throwing the ball on the run. But once Wellington got close to their end zone, Brookside’s defense came out with some fire, dragging the Dukes back at least 15 yards.

Wellington then bounced back, on a Luke McCellan rushing touchdown making the Duke lead 19-10 after the missed PAT.

With 9:30 left in the 3rd quarter, Brookside had a great offensive drive ending with a Jaycob Kolleda rushing touchdown, making the score 19-17 with Wellington still holding on to the lead. Wellington came out with a great pass to Ty Moore, only to be brought back by an illegal man down field penalty. Forcing the Dukes to try and convert on a 2nd-and-32.

All game Wellington had some chances to convert on big passes but couldn’t execute. If Wellington would’ve executed on those passes, we would be looking at a very different ball game.

Brookside took the lead off of a Kenny Grobolsek keeper, erupting the crowd with 3:39 left in the game. Brookside then converted for 2, taking the 25-19 lead. Wellington seemed to take the wind out of Brookside’s sail, with a 64-yard run from Kaleb Taylor.

Wellington then scored with 2:15 left in the game from a 16 yard TD pass from the elusive Jayden Skinner to Jon Brasee, after the PAT the Dukes took the 26-25 lead.

Nearing the end of the game, it was once again Brookside inching closer to the end zone, thanks to a 25-yard pass to Karson Nail.

It came down to the last 5 seconds, Brookside sent out Matthew ODonnell to kick, who made it to take the 28-26 lead with 3 seconds to go, and the stadium absolutely erupted.

Wellington couldn’t take the kick return back, as Brookside took the victory 28-26 in what was an absolutely amazing game and possibly the best high school football game so far in 2020.