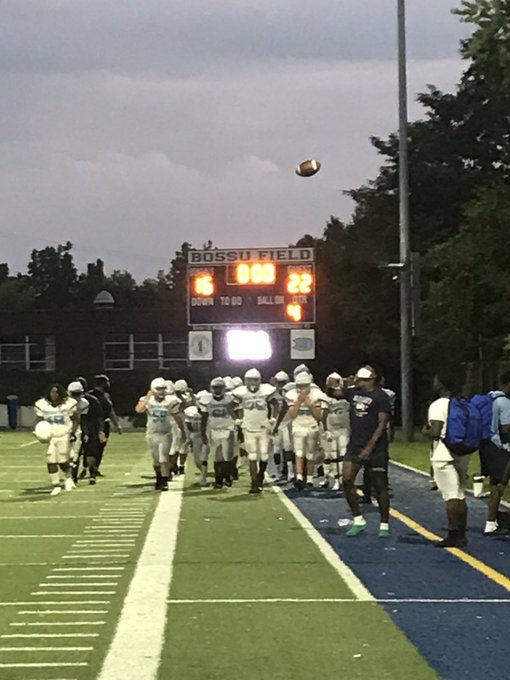 WARREN, OHIO – With Harding’s offense finally clicking, and Benedictine holding a seven point lead, a traditional team would think running the final two minutes off the clock would be the strategy.

However, Benedictine is not the traditional team.

On 2nd down with 1:36 remaining in regulation, Ronnie Schultz went deep to Marvin Conkle for a 75-yard dagger that caught most of those at Mollenkopf Stadium by surprise.

Both offenses were slow out of the gate, as neither team picked up a first down until late in the opening quarter.

Both Harding and Benedictine have exchanged two punts each to start the game.

Smothering defense like this has contributed to the slow offensive start.

This drive was when Elijah Taylor hit Dom Foster for a 60-yard pass to end a scoreless opening quarter.

Massive gain of 60 yards is the last play of the quarter, as Harding is set up at the Benedictine 10 to start the 2nd.@BeneBengalsFB @WGHAthletics @NEOSportsInside pic.twitter.com/XjALLcfM4L

Harding wasn’t able to get into the end zone despite the great field position to start the second quarter, as a 21-yard field goal by freshman Jake Daugherty gave Harding their first (and only) lead of the game.

An interception by Andre Rodgers was nearly returned for a touchdown moments later. This set up a two play drive that ended in a touchdown carry by Gary Merrill.

An 80-yard touchdown pass from Schultz to Conkle extended Benedictine’s lead to 14-3, swinging the momentum into Benedictine’s favor just before the half.

Schultz had 202 passing yards in this contest, 175 of which were to Conkle. Conkle also caught both of the touchdown passes thrown by Schultz.

Harding’s offense continued to struggle in the second half, but their strong play on defense kept them within striking distance.

Then with 3:23 left, a punt attempt ended in disaster for Benedictine. Whether it was a designed fake, or just a bad snap, Harding stopped it to set the offense up at the Bengal 26.

Benedictine tries a fake punt deep in their own territory and it is UNSUCCESSFUL!

Harding takes over at the Bengals 26, trailing 17-10. 3:23 left in regulation. pic.twitter.com/ooHIUJjNnR

Dropped passes were a trend in this game for the Raiders, and this trend continued to haunt them late. A four and out gave Benedictine the ball back, as Harding couldn’t take advantage of the great field position.

After a gutsy call gave Benedictine a late 24-10 lead on a 75-yard touchdown pass from Schultz to Conkle, Harding continued to fight back.

With just a few seconds remaining, Taylor connected with Foster once again to cut the lead to 24-17.

This is as close as the Raiders got, as the onside kick attempt failed and the score went final.

Harding drops to 0-1 on the young season, and will look to bounce back next Friday when they host Cardinal Mooney (0-1).

Benedictine improves to 1-0, as their gauntlet of a schedule continues on the road against St. Vincent-St. Mary (1-0) next Friday.