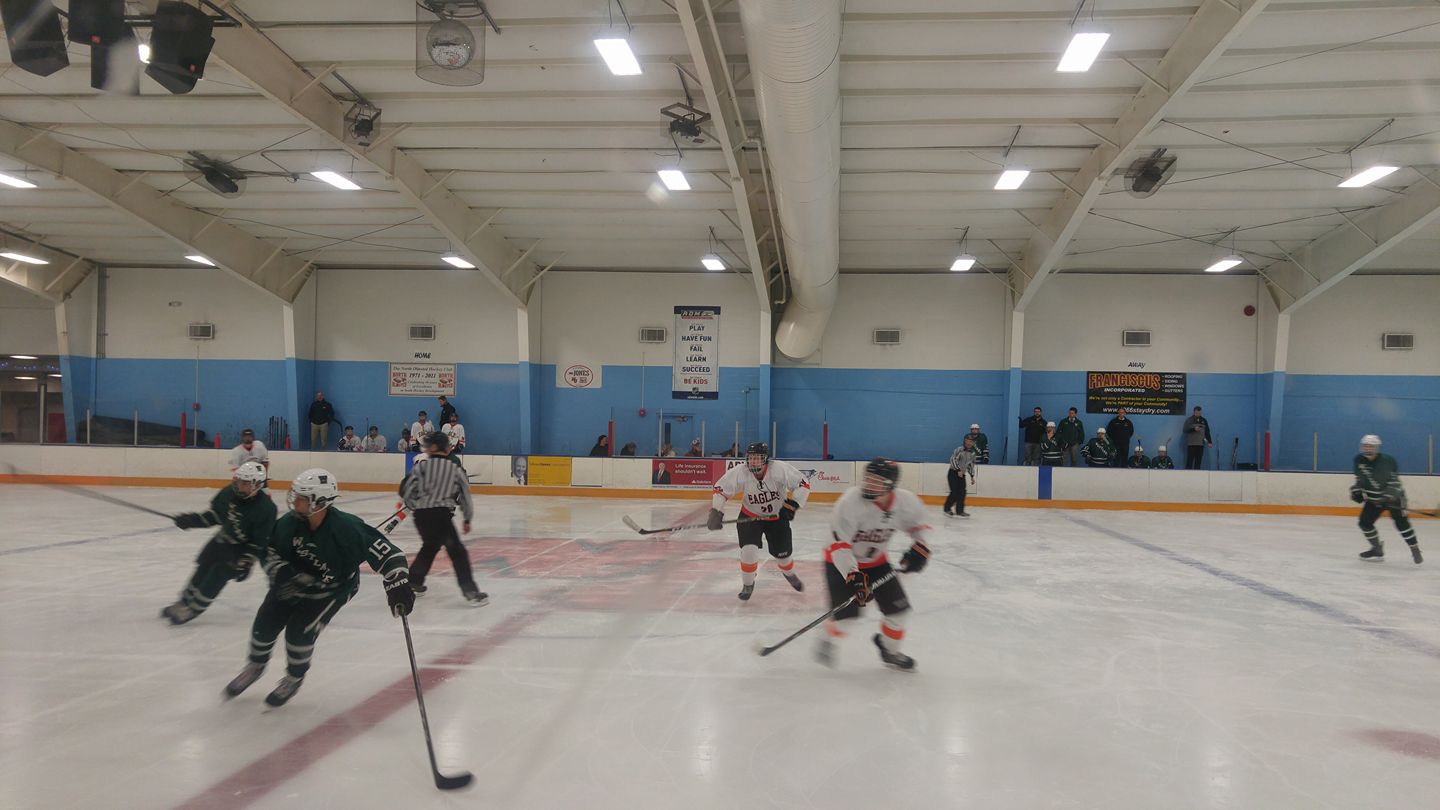 NORTH OLMSTED, Ohio – Both teams had limited rosters today, but unlimited amounts of heart as they both skated their tales off in search of victory.  Both teams only had 11 players in uniform, North Olmsted missing their best player Riley Vertosnik due to illness, making matters worse for the Eagles.  In the end, just as many thought it would be, it came down to the very end before North Olmsted pulled out the 3-2 victory.

Westlake skated fast all game, led by speed Demon Sam Mansour who seemed to be all over the ice.  They also played well on defense, getting back to stop several odd men rushes for North Olmsted from occurring.  The Demons got back on defense every time and kept things close throughout.

The Eagles of North Olmsted finally broke through late in the first period when Ryan Godin found the back of the net following a precise pass from Cameron Wandrie to put the Eagles on the board.  Ryan Godin may have been one of the smallest players on the ice today, buy by far one of the fiercest!

The Westlake Demons wasted no time tying the game, as only seconds later Austin Loosli scored following a sharp pass from Sam Mansour.  North Olmsted didn’t allow the game to stay tied long as they scored one right back when Travis Vitaz put one between the pipes off of a pass from Shawn Donovan.

The second period began with Westlake missing on several chances to tie the game.  Including a great 5 on 2 rush near the North Olmsted goal that they couldn’t capitalize on.  The Demons would go 0 for 2 on power plays during the second period. They did have a power play goal called back due to interference. The Eagles would expand on the lead a little later in the period on Ryan Godin’s second goal of the game.

Austin Loosli scored his second goal of the game with 7 minutes left in the contest, but the Demons couldn’t get any closer then that as the game ended in a 3-2 victory for the North Olmsted Eagles.

A special thanks to Westlake Super Fan and Hockey All Star Alumni CJ Tinline who assisted with the spotting today.  CJ also provided excellent commentary throughout the game that kept the fans warm with laughter, as the weather outside did it’s best to keep everyone else frozen!

Sid Vicious No Shows AIW Show Costing Promotion Thousands And Stiffing Cleveland Fans
Isaiah Thomas ruled out for Saturday, but could his return come in homecoming game against Boston?