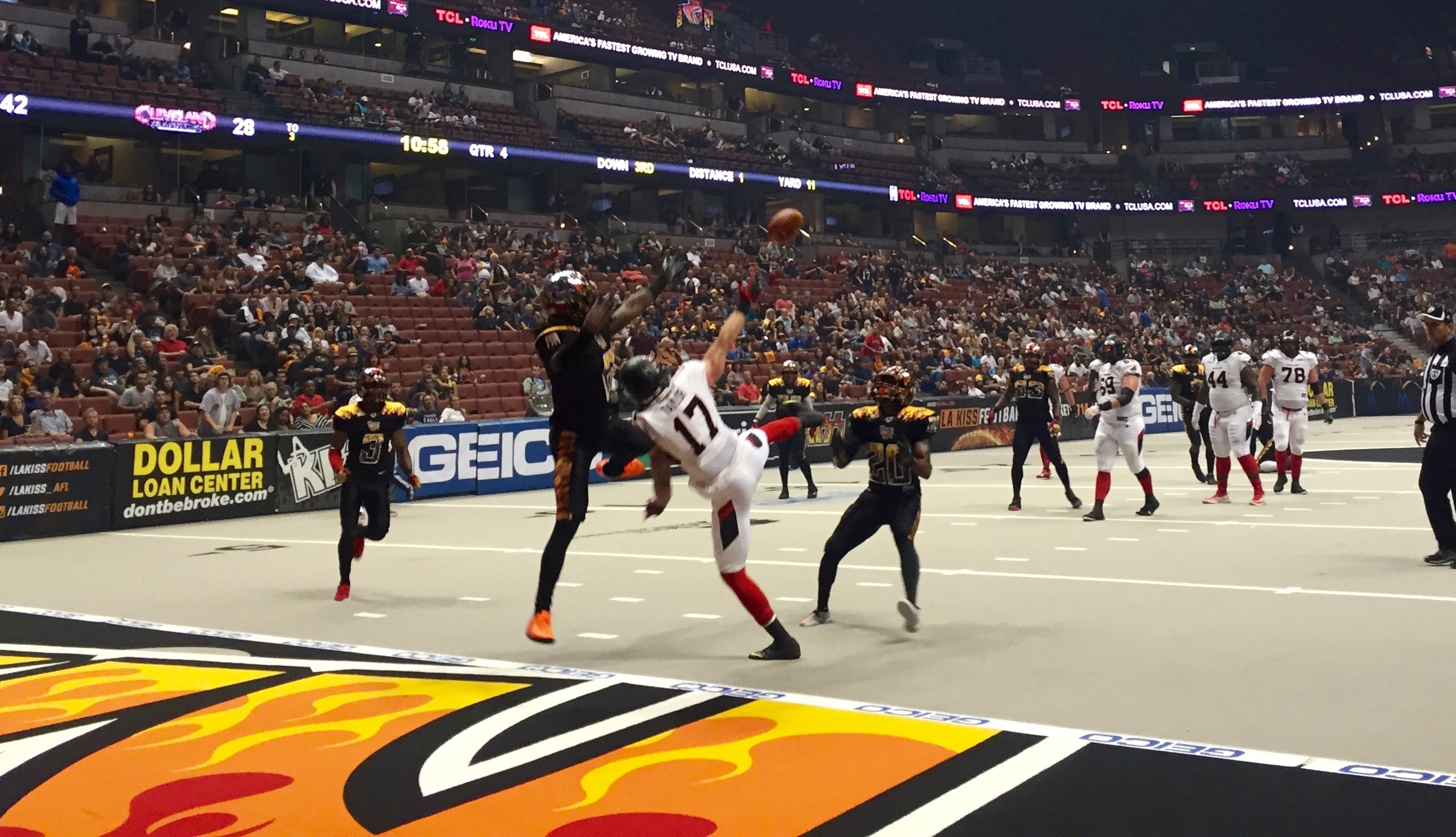 Despite eight total touchdowns from QB Arvell Nelson, the Cleveland Gladiators were defeated by the LA KISS on Saturday in front of 8,069 fans at the Honda Center in Anaheim, Calif., by a final score of 63-61. With the loss, the Gladiators fell to 7-8 on the season and currently sit alone in third place in the AFL’s National Conference standings.

Nelson started the scoring for the Gladiators with a 19-yard strike to WR Quentin Sims early in the first quarter before LA tied the game at seven thanks to a six-yard touchdown pass from QB Nathan Stanley to KISS WR Donovan Morgan shortly thereafter. Later in the frame, Nelson delivered a three-yard rushing TD before Stanley connected with Morgan once more to knot things up at 14 apiece. Cleveland WR Collin Taylor had the last opening-quarter laugh, however, as the Indiana native reeled in a 28-yard TD heave from Nelson as time expired in the first to extend his franchise-record streak to 31 straight games with at least one touchdown reception.

In the second quarter, Stanley connected with OL/TE Colin Madison on a four-yard TD pass to tie the game at 21 before Nelson and Sims combined on a seven-yard pitch-and-catch to deliver the Gladiators a 28-21 advantage. However, LA once again rallied to tie the game as Stanley and wideout DJ Stephens hooked up for an 11-yard score with just seconds remaining in the half.

In the third and early fourth quarters, LA rattled off 21 unanswered points before Nelson hit Sims for another passing TD, this one from 15 yards out, to start a Gladiators comeback at 49-34 midway through the final stanza. After a successful onside kick attempt, Nelson launched a 38-yard bomb, again to Sims, to continue the rally before an eight-yard passing score from LA’s Stanley to Morgan stopped the bleeding for the KISS and pushed LA’s edge to 56-41. The ensuing drive resulted in a one-yard Nelson QB sneak that made it 56-48 and led to another successful onside kick that was batted all the way inside the KISS 10-yard line before it was scooped up by Cleveland rookie DL Nick Seither, who took it to the house, hoisting the Glads to within a single score at 56-54 after an unsuccessful two-point conversion attempt.

LA recovered the ensuing onside kick attempt though and benefitted from Stanley’s eighth TD pass of the night with less than one minute remaining in the game, a seven-yard connection to Stephens, and, after a 19-yard Nelson to Sims hookup for Cleveland, the KISS held on for a dramatic 63-61 victory.

Nelson finished with 21 completions on 31 pass attempts for 332 yards and eight total touchdowns (two rushing), while Sims paced the Gladiators’ receiving corps with 12 catches for 197 yards and five touchdowns and Taylor supplied four grabs for 81 yards and one score.

Next up for the Gladiators, it’s a Week 17 road clash vs. the Arizona Rattlers with full coverage, live from Talking Stick Resort Arena in Phoenix, AZ, underway on Sunday, July 24th at 9:00 pm on 92.3 The Fan.