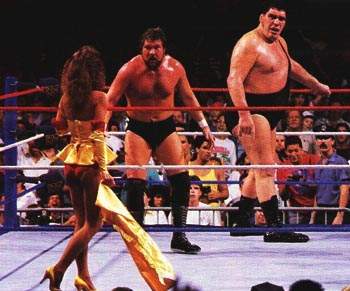 NEW YORK, New York – As the WWE approaches their 28th annual Summerslam this upcoming August, we here at NEO Sports Insiders thought we’d take everyone on a trip down memory lane and review the previous 27.

This columns edition will feature the first ever show, the 1988 edition. It took place on August 29, 1988, in Madison Square Garden, located in New York City, New York.

The main event featured and epic clash between the Mega Powers, consisting of Hulk Hogan and recent WWF Champion Randy Macho Man Savage vs the evil alliance of The Mega Bucks, consisting of Ted Dibase, the Million Dollar man along with Andre The Giant.

It was the classic good vs evil scenario that saw the good guys prevail, with the assistance of the very sexy Elizabeth ripping of her skirt, and showing everyone her luscious legs. Back then, this was seen as a lot of skin and a very big deal!

The showdown was so big that no normal referee could do, and the WWF brought in Jesse The Body Ventura, normally a broadcaster, down from the booth into the ring to referee the match. Because of this, it caused the WWF to put
Superstar Billy Ghramn in the press box alongside Gorilla Monsoon to call the action.

Elsewhere on the card, prior to SummerSlam, The Honky Tonk Man had been the longest reigning Intercontinental Champion in WWF history and was originally supposed to defend his championship against Brutus Beefcake, but Beefcake was unable to compete as a result of an injury received from “Outlaw” Ron Bass the week before.

With an opening in the match, it set up for the explosion of the Ultimate Warrior onto the main stage for the first time in his WWF run. He took full advantage by steam rolling the champ for the belt in less than 30 seconds. The

Honky Tonk Man was never again relevant, and the Ultimate Warrior was on to great things!

The event began with a match between The British Bulldogs (Davey Boy Smith and Dynamite Kid) and The Fabulous Rougeaus (Jacques and Raymond Rougeau). A match full of action but would eventually lead to an anti climatic time limit draw.

In a couple of squash matches, it was the Powers of Pain demolishing The Bolsheviks while Bad News Brown made very short work of Ken Patera. Big Boss Man made his presence felt as well by plucking the feathers and beating the Birdman Koko B Ware.

The second to last match of the night was between Jake Roberts and Hercules. When Roberts attempted to slam his opponent’s head on to the mat with a DDT, Hercules was able to escape the maneuver and take control of the match. As Hercules attempted to slam Roberts to the mat, Roberts reversed the move into a DDT, enabling him to pin Hercules for the win.

That match was important because it symbolized the beginning of a face turn for Hercules as his manager Bobby the Brain Heenan forgot about him, and never came out of the locker room to assist him. The writing was on the wall for that union.

Speaking of fractured unions, prior to Summerslam it was Jimmy Hart leading the Hart Foundation to tag team gold, sadly, he sold them down the river and this as well led to a Hart Foundation face turn. It got off to a bumpy start for the pink and black without Jimmy Hart as Reigning champions Demolition (Ax and Smash), accompanied by both Mr. Fuji and Jimmy Hart defeated The Hart Foundation when Bret Hart attempted a piledriver but Ax hit him with Jimmy Hart’s trademark megaphone. Smash then pinned Bret Hart for the win.

All in all it was a solid first offering of the end of the Summer classic, and arguably the second biggest show of the year for the WWF.