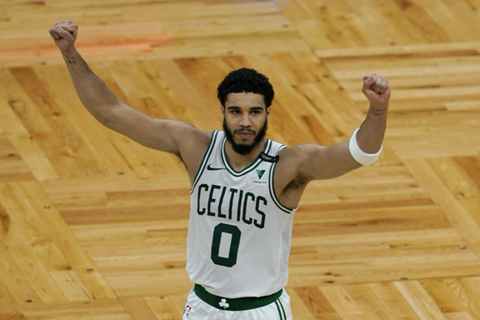 BOSTON – Coming into Game 4, Boston saw themselves without Marcus Smart. That was no problem for the Celtics. They dominated in every aspect of the game. Team defense, physicality, and an impressive performance from Jayson Tatum were keys to their blowout victory.

Boston came out of the gates on fire. With 5:14 left in the first quarter, the Celtics held a lead of 18-1. Miami finally hit their first field goal of the game with only 3:22 left in the first. Boston’s tenacious defense and rebounding were a problem all night long for the Miami Heat. The Celtics got great offensive play from Jayson Tatum and Derrick White in the first. Tatum put up 12 points to go along with 10 from Derrick White. Miami scored the lowest first quarter point total in the playoffs of the franchise’s history. At the end of the first quarter, the score was 29-11 Boston.

The second quarter held much of the same play from both teams. Boston went on multiple scoring runs throughout the quarter. Overall, Miami was still struggling to find any sort of offense. However, Victor Oladipo scored 12 points in the quarter for the Heat. The Boston Celtics proved to be too much to handle in the first half to keep the game close at all. The score at the end of the first half saw Boston with a lead of 57-33. Oladipo had been the only bright spot for the Heat. He had 18 of the 33 Miami points heading into the break.

The third quarter saw offensive struggles from both teams. Miami shot an abysmal 8-25 on field goal attempts. Boston was not much better shooting the ball. They were only able to knock down seven of their twenty field goal attempts in the quarter. Jayson Tatum continued to be a bright spot for the Celtics though. He raised his point total to 31 by the end of the third quarter. This ended up being his final total and a game-high. The score at the end of three was 76-52 Boston.

By the fourth quarter, both teams mostly had bench players in the game. However, it ended up being the highest scoring quarter of the game. The Heat finally started hitting shots consistently. They went 8-16 from three-point range in the final quarter. Duncan Robinson had been struggling throughout the playoffs for the Heat. The fourth quarter might have been what he needed to get his confidence back up. He hit four of the eight three-pointers made by the Heat in the final quarter. Payton Pritchard has been the exact opposite for the Celtics. The young guard has been playing with max confidence throughout the playoffs. That continued for him tonight as he scored 14 points in the game off the bench. Of those 14 points, 11 of them came in the fourth quarter. The end of the game saw Boston coming out with a big victory. The final score was 102-82.

With the victory, Boston tied the series up at two games apiece. They will look to carry their momentum into Miami for Game 5. They look to steal another game away from their home floor as they did in Game 2.

Game 5 will be on Wednesday, May 25th at 8:30PM in Miami. This will prove to be a pivotal game as the winner will go up three games to two in the series. You can tune-in to the game on ESPN.