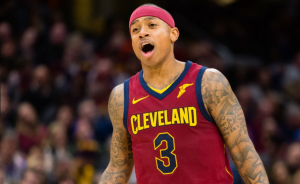 A karate chop to the face of Andrew Wiggins spelled out an abrupt end to Thomas’ second start in a Cavs uniform. Thomas clotheslined the aggressive dribble-drive to the hoop, and immediately paid the price in what was undoubtedly an easy call to make. Minnesota was leading 82-52, and played the rest of the evening against a team without their second-best scoring threat.

It has been quite the journey back to the hardwood for Thomas, as he entered play with 40 points but two technical fouls in 36 minutes. A nine-point, 3-for-11 performance in an 18-minute workload was a step back from the two-time All-Star’s recent success, leaving room for improvement moving forward.