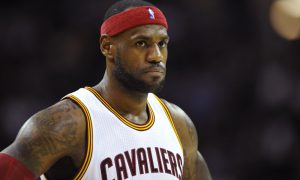 With 99-or-more points allowed in their last 12 games and two of their highest scoring totals in the past week, the Cavaliers figured to balance offense and defense against the Timberwolves, a team with just three losses since Dec. 18.

The opposite proved to be true.

From a 27-point deficit, to a 10.5% (2-for-19) shooting percentage from beyond the arc, to a 34.8% (16-for-46) shooting percentage from the field, the first half could not have been uglier for the Wine and Gold. Kevin Love went 0-for-6 without any points, rebounds or assists, while JR Smith and Isaiah Thomas rounded out the starting lineup in dreadful fashion: 0-for-12 from the field and 0-for-8 from three-point range.

Minnesota outmatched Cleveland in every facet of the game, with 11 more rebounds, five less turnovers and a miraculous, buzzer-beating shot in the first two quarters alone. Dwyane Wade tallied a team-high 11 points and Jeff Green chipped in nine, but just 15 points from the starting unit was the difference in the blowout half.

The offense looked stagnant with little cutting to the basket. The defense appeared to be lost in transition, with heads on a swivel and feet stuck in sand. The defending Eastern Conference champions looked to be in the midst of a five-game road trip that was producing the worst stretch of the campaign.