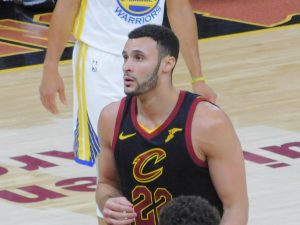 When Larry Nance Jr. was acquired by the Cavs at the trade deadline, he quickly distinguished himself among the new additions. He provided versatility on both ends of the floor, which in turn brought more energy to a veteran team that had been coasting in the worst possible way up until that point.

He started 10 of the 24 regular season games he played in for Cleveland this year, averaging 8.9 points and 7.0 rebounds.

Ever since he suffered a hamstring injury late in mid-March, he never seemed to be quite the same. But like Thompson, Nance Jr. stayed ready as he navigated his first playoffs.

His signature game this postseason arguably came in Game 6 against the Boston Celtics when he put up 10 points and grabbed seven boards. He also quickly proved he could have an impact against Golden State, scoring nine points and pulling down 11 rebounds in Game 1.

In an offseason that is bound to be full of uncertainty for the Cavs, Nance Jr. offers plenty to be excited about for next season.

Up next: Jose Calderon