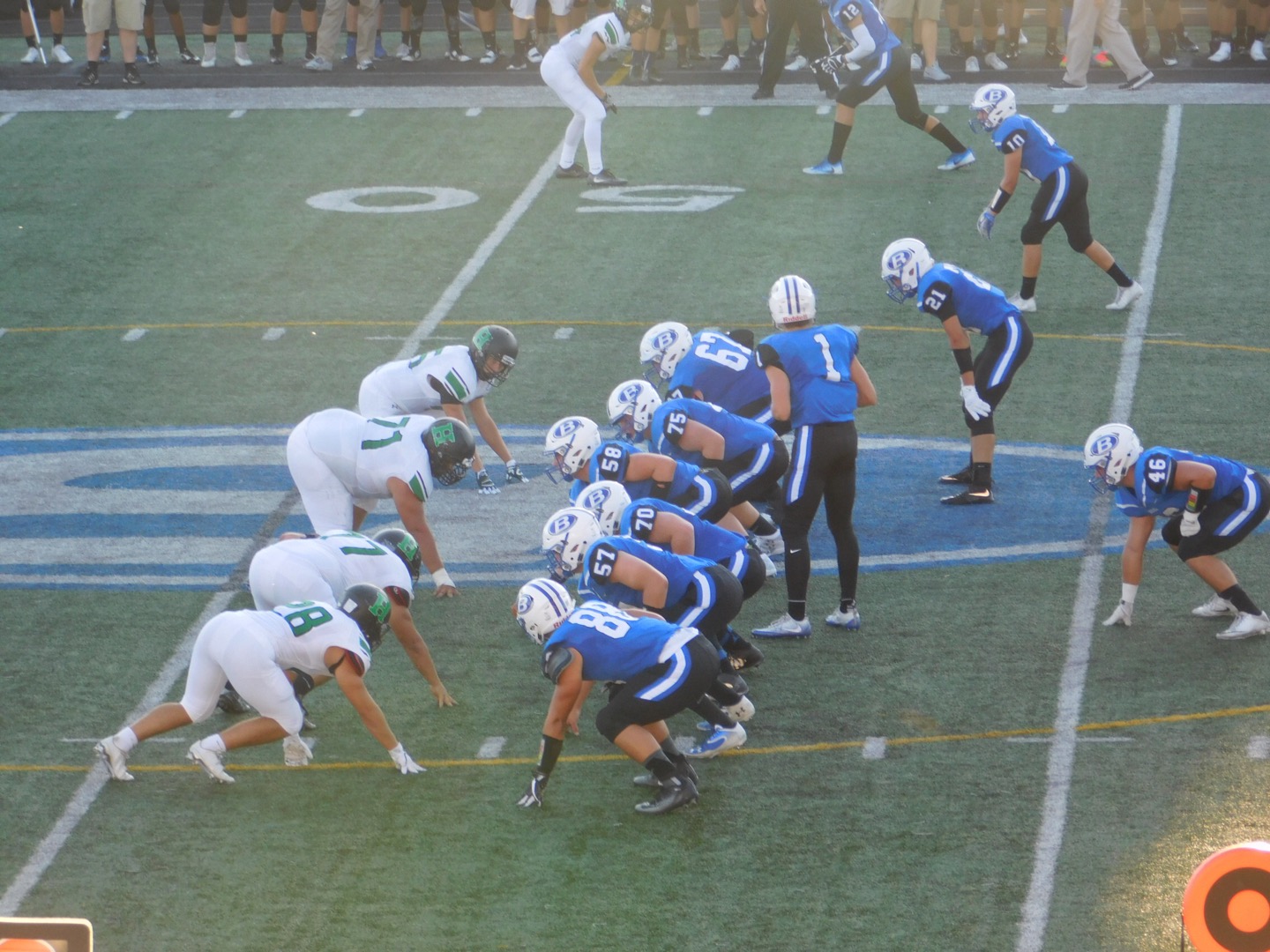 This Game Recap Is Brought To You by Mullins Construction.

The Blue Devils defense showed a lot of heart and hustle tonight as they stopped a fourth quarter potential game winning drive by Highland in the closing seconds.

The Blue Devils pulled off the 17-14 upset on the strength of Senior Running Back Jacob Martin who played great all night. Martin ran the ball 26 times for 178 yards, with 130 of them coming in the first half. He averaged 6.8 yards per carry.

Martin had touchdown runs of 75 yards and 5 yards. The 75 yard strike gave the Blue Devils their first lead of the game in the Second Quarter. Martin had this to say about his performance tonight “The offensive line a great job giving me holes to run through and the coaching staff called the right plays”.

His head coach Luke Beal had this to say, “The goal was to run the triple option well. The kids have a year under their belts and little more experience running it. We looked good in our scrimmage coming into this one. Highland has a fast, quick and strong defense we had to account for. They are pretty solid up front.”

Highland drew first blood on a 38 yard touchdown pass from Matthew Earnst to Evan Kasulones to make it 7-0 at the 8:06 mark. Kasulones made a beautiful move to get wide open down the middle of the field. The drive was kick started with a 36 yard strike to Ryan Frederick.

The Blue Devils would turn the tide when Brunswick Linebacker Curtis Helman had a big sack inside of the Highland 20 late in the first quarter to force a punt from deep in their own end. Brunswick then had a 4th and 5 from the 10 of

Highland and elected to kick a 27 yard FG as Tim Dick connected to make it 7-3 game.

The next time Brunswick got the ball back, they scored again on a 75 yard touchdown run by Jacob Martin to take a 10-7 lead.

Highland’s defense forced a 3 and out to get the ball right back after a failed drive of their own on the Brunswick 20. A great punt return from Evan Kasulones. Followed by a 10 yard run from Burnside put Highland in position to score with little left on the clock in the first half, when things went astray.

With 55 seconds left, the Hornets ran 3 plays from inside of the Brunswick 10 and could not score. They had no timeouts left and had to rush to try and score with 2 seconds left in the quarter, but the pass was out of the endzone and they blew a perfect chance to at least tie it before the half.

There was a long pass interference call to start the second half by Brunswick, which fueled a Highland drive. They would cap it off with a 22 yard touchdown toss to Jake Sir Louis at 9:02 to make it 14-10 Highland.

With 2 minutes left in third quarter Brunswick converted a crucial 4th and 10 from the Highland 30 to keep the drive alive. This allowed Martin to open up the 4th quarter with a 5 yard touchdown scamper with 10:50 left in the game to give the Blue Devils back the lead 17-14.

Late in the game with the Blue Devils trying to salt way the clock, Brunswick had a 4th and 1 from the 50 with 5:02 left in the game. They would hand it off to Martin who got the first down by the nose of the ball. The Blue Devils would punt 4 plays later, but that helped them run off a serious chunk of time.

Highland gots the ball back with 2:16 left in the game down 17-14 from their own 20. They would face a 4th and 7 from their own 26 with 1:28 left on clock and convert on a 40 yard bomb to Jake Sir Louis to keep the drive alive. The rally would eventually fall short, and the Blue Devils hung on for the 17-14 victory.

The Hornets will look to bounce back next Friday night as they open up the home portion of their schedule against the visiting Canada Prep Academy. This will be the first of four straight home games for the Hornets.

The Blue Devils will look to stay hot as they travel to take on Austin Town Fitch.