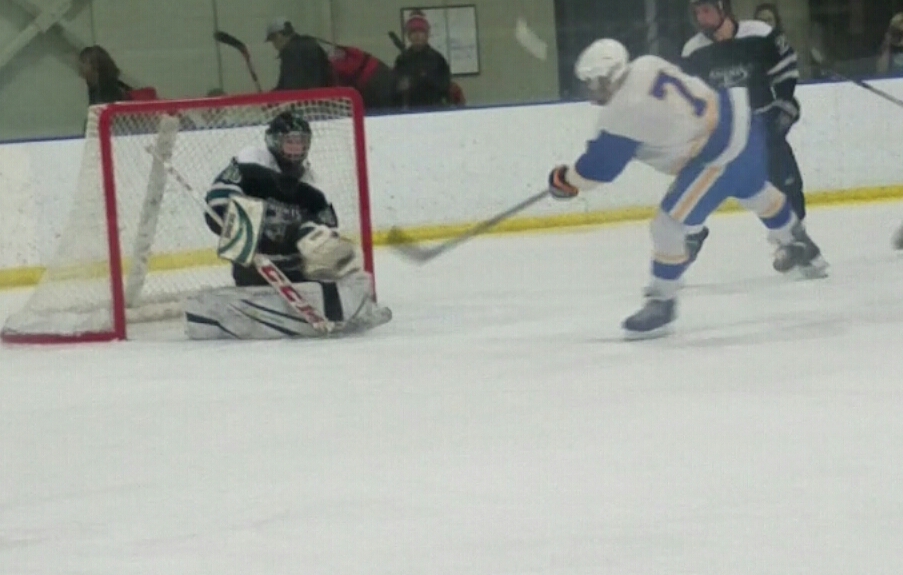 The Brooklyn Hurricanes rolled past the Nordonia Knights in Baron Cup III action on Tuesday night, cruising to a 7-1 victory.

Brooklyn was led by three goals from Matt Crossman, who completed his hat trick late in the second period.

“I think we came out and were confident. We weren’t nervous at all,” said Crossman.

“Even when we were up 2-0 after one period, we didn’t let off. We stepped on their throats and finished it.”

Brooklyn head coach Ryan Kelber wasn’t suprised to see Crossman put together another great game, as the junior leads the team in scoring with 34 points on the season.

“He’s one of the best all-around players in the Blue Division,” said Kelber.

“He plays defense. He’s a threat on offense. He does his job defensively and oh yeah, he’s got some size too, which helps.”

Drew McKinley scored the lone goal for Nordonia on a power play with 2:49 to play.

Brooklyn improves to 22-2-0 with the victory, extending its win streak to 13 games.

Kelber credits his team’s poise and ability to stay focused on the task at hand.

“We’re not going to get ahead of ourselves. These seniors won zero games their freshman year, so this is something special and we’re going to cherish the moment.”

It was Nordonia’s third Baron Cup appearance in school history and the first trip to the tournament for the Knights since 2014.

Brooklyn’s next match is Saturday at 3 pm, when the Hurricanes play the winner of Thursday night’s match between #2 Normandy and #3 Aurora.