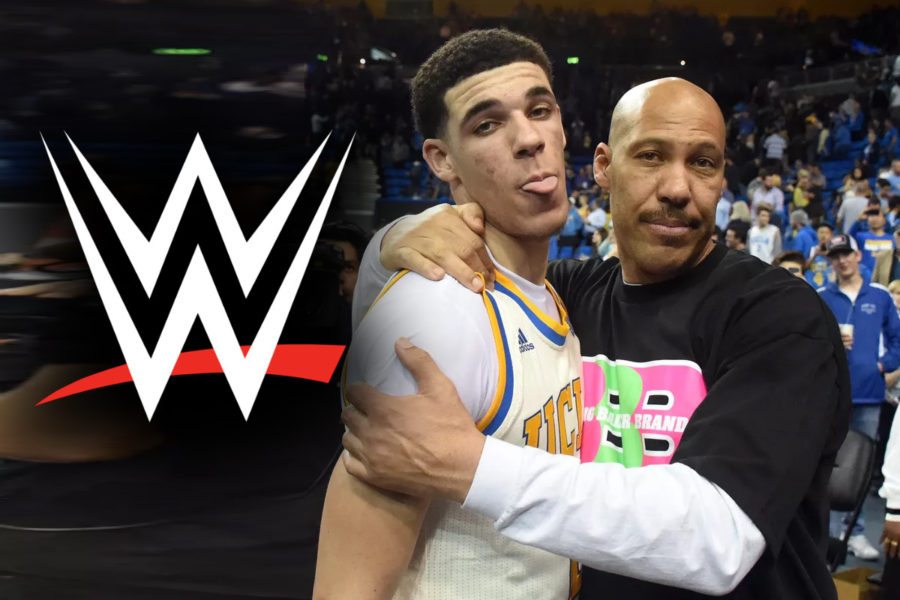 It didn’t take long, “less then a week after being drafted”, but Lavar Ball found yet another way to exploit his son’s immense talent.  This time, by appearing on WWE Monday Night Raw alongside his son’s Lonzo Ball, and LaMelo Ball.

Lavar Ball’s “Big Baller Brand” featuring adult shoes that start as low as $500, has been struggling and have sold less then 1,000 pairs from what some reports indicate.

The WWE Monday Night Raw ratings have also gone into their summer swoon as of late, and have been struggling.  An appearance by Ball on Miz TV, was a desperate plea to help both brands.

As for the segment itself, thanks to the quality of The Miz on the microphone, it wasn’t half bad.  It was basically Lavar running his mouth for five straight minutes of rambling until Dean Ambrose came down and talked about his “balls”.  The exit music soon came, and off to commercial it was.

For what it is was worth, in the 34 seconds young Lonzo was actually allowed to speak, he sounded quite humble and modest.  I see a bright future for this kid.  If his father doesn’t get in the way, I see him having a good career.

WWE Monday Night Raw can be seen each week on the USA Network from 8-11pm, est.

Put him in the Hall of Fame, Vince pic.twitter.com/9PP2J6D8wE

Of course, LaVar Ball couldn't resist the urge to take off his shirt and challenge The Miz. pic.twitter.com/IIUZvqDwot