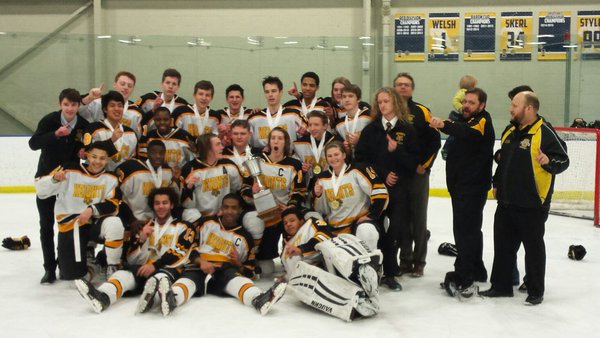 #1 Cleveland Heights and #2 North Olmsted faced off for the Baron Cup II Championship match Sunday afternoon in front of a packed house at the John M. Coyne Recreation Center in Brooklyn, Ohio.

It was a wire to wire game, as Cleveland Heights came from behind to win the Baron Cup II Championship 3-2, thanks to a Hat Trick from star player, Conor Lewis.

North Olmsted came into play winning 22 of their previous 24 games. Cleveland Heights came into play on a 19-game win-streak and had not lost in any of their last 21 games.

The fans for both sides were lively and it was a championship atmosphere from start to finish.

Cleveland Heights went on the power play just over two minutes into the game, something that North Olmsted obviously was not hoping for after the Tigers entered play outscoring opponents 17-0 in their first two games of the tournament.

The Eagles were able to kill the penalty, as Cleveland Heights could not take advantage of the power play.

North Olmsted went on their first power play of the day with 5:30 to play in the first period and got on the board one minute later, taking a 1-0 lead on a goal from Shane Malinak. Shane was assisted by his brother, Justin.

It was the first goal allowed by Trent Swain of the entire tournament. Swain has 11 shutouts on the season.

Cleveland Heights found themselves short-handed again for the final two minutes of the period and the Eagles would hold onto their 1-0 lead heading into the first intermission.

North Olmsted entered competition outscoring opponents 7-0 in the first two games of the tournament, and came into play with three straight shutouts. The last time North Olmsted allowed a goal prior to Sunday’s championship match was January 30th, when North Olmsted faced Cleveland Heights in the regular season.

Cleveland Heights won their first meeting 3-0 and was the only team to beat North Olmsted in any of their 12 games played within the conference.

Cleveland Heights went on the power play two and a half minutes into the second period, but the Tigers could not capitalize.

A few minutes later, the Tigers got on the board with an even-strength goal from their leading-scorer, Lewis, who tied it up at 1 with just under seven minutes remaining in the second period, ending Goudin’s hopes for another shutout.

The game would remain tied at the end of the second period.

North Olmsted regained the lead at the 1:44 mark of the third period, thanks to a go-ahead goal from Travis Vitaz, which put the Eagles in front 2-1.

30 seconds later, Cleveland Heights tied it back up at two, as Lewis scored his second goal of the day at the 2:18 mark of the third period.

Lewis scored yet again just under a minute later to put the Tigers on top 3-2, scoring his third goal of the game. It was Lewis’s 54th goal of the season and his 11th in three games of the Baron Cup tournament. He scored four goals in each of the first two matches, making Sunday his third-straight Hat Trick.

North Olmsted pulled their goaltender with just over a minute to play, still trailing 3-2, but the Tiger defense and the excellent netminding of Swain held strong, as Cleveland Heights would win the Baron Cup II Championship by a final of 3-2.