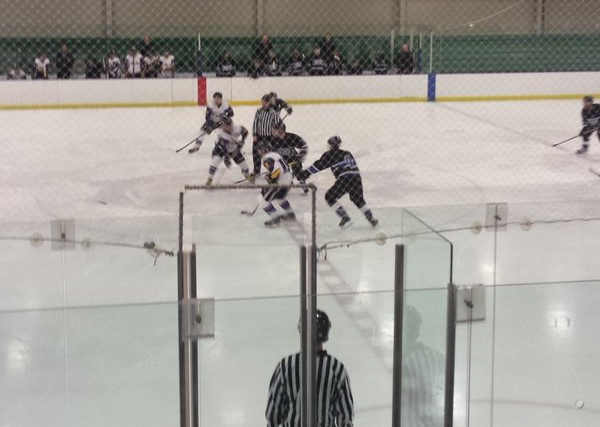 The third and final game of Tuesday’s slate of Baron Cup action featured #3 Avon and #6 Midview for a Quarterfinal matchup with a chance to move on to the Semi-Finals.

It was a penalty-filled game and Midview pulled away with a 4-1 victory to advance to the Semi-Final.

Midview struck early taking a 1-0 lead 1:57 into the first period on a goal from Kyle Nagel.

Avon found themselves in penalty-trouble early, after a boarding penalty cost the Eagles five minutes of playing short-handed.

The Eagles managed to keep the Middies at bay for those five minutes, as the game stayed 1-0, until Jacob Scheetz made it 2-0 with an even-strength goal with 25 seconds left in the first period.

Midview would lead 2-0 at the end of the period.

Zach Schneider made it 3-0 7:31 into the second period, and the rest of the period was filled with penalties, mostly from Avon, as Joe Goetz was ejected for misconduct and charged with ten minutes for two major penalties, causing Avon to play short-handed for the end of the second and beginning of the third period.

The Eagles played short-handed for the first six minutes of the period and then there was a delay due to a hole in the wall caused by Avon’s Dominic Bowlin, who crashed into the wall with a full head of steam.

Shane Docherty put the Eagles on the board 9:16 into the period to make it 3-1.

Scheetz would answer right back with his second goal of the night to make it 4-1 with just under three minutes to play.

Docherty was ejected with 57 seconds to go, joining his teammate as Avon would fall 4-1.

Midview will take on the #2 North Olmsted Eagles in Friday night’s Semi-Final matchup at 7:30 PM.

Keep it right here for Wednesday’s Baron Cup action, as the first face-off is set for 4:30 PM.