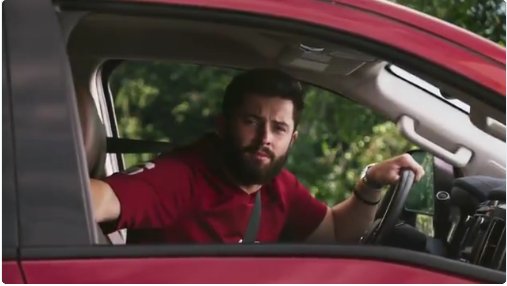 While many Heisman Trophy winners fizzle out in the NFL, ESPN and Nissan have found a way to keep many of them relevant with their annual “Heisman House” commercials. Now, the house has welcomed its newest resident, Browns rookie quarterback Baker Mayfield.

Mayfield is the focus of ESPN’s latest Heisman House ad as the former Oklahoma QB serves as the butt of the joke upon making his arrival to house with a flatbed of “crap” to move in. The list of crap includes a Rose Bowl Parade bust of Mayfield’s head, a large crate of headbands, a washer and dryer, a Nissan SUV and much, much more.

We won’t spoil the punch line for you though. Watch for yourself:

Baker's moving into the Nissan Heisman House and he needs lots of room. #Soonerspic.twitter.com/SEfIHZVB3M

Mayfield’s excessive baggage is reference to the handful of character concerns NFL teams had about drafting the Heisman winner back in April. In the end none of it mattered enough to prevent him from being drafted first overall by the Browns. Either way, it’s refreshing to see Mayfield is self-aware enough to play along with the joke.